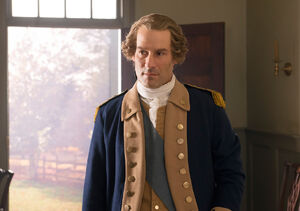 Simcoe ignites a political witch hunt to weed out rebel conspirators in Setauket. Washington assigns Ben to a secret mission.

It's the spring of 1777. Anna follows a trail of flowers to the DeJong Tavern cellar, where she finds Abe waiting. They make love.

At the church, Simcoe tells Hewlett that spies have been operating under their noses. Hewlett says Simcoe lacks evidence and still hasn't found the Patriot petition.

Hewlett feeds his beloved horse, Bucephalus, half of an apple. While Hewlett's back is turned, Simcoe secretly feeds Bucephalus another half of an apple. Almost immediately, Bucephalus bucks violently around the room, then collapses and writhes on the ground. Hewlett, seeing that his horse is suffering, shoots it dead.

A doctor examines Bucephalus and suspects poison. Simcoe suggests Hewlett was the intended target and volunteers to investigate Lucas Brewster, who sold the apples to Hewlett.

In Morristown, Ben tells Washington that they decoded enemy dispatches using the cipher key that Abe obtained from John André's residence. They learned that the British are planning to attack Philadelphia from the south, rather than the north as scouting reports have previously led them to believe. Washington tells Ben to lead troops north to play into Britain's feint while they shore up their southerly defenses.

Mary shows up unannounced at Woodhull Farm only to find Abe is not home. She voices her suspicions of Abe's whereabouts to Baker, who reassures Mary that Thomas is at least growing up with loving parents.

A Redcoat enters DeJong Tavern with Lucas in custody and tells Anna that Hewlett has ordered the cellar to be used as a temporary jail.

At Whitehall, Richard tells Abe that Simcoe suspects Lucas of attempting to kill Hewlett. Richard tells Simcoe they should consult another expert before executing Lucas.

As they walk outside towards Abe's wagon, Richard is shot in the chest by a sniper. A small smile crosses Simcoe's lips.

Back inside, Dr. Mabbs extracts the bullet from Richard. Simcoe reports that the sniper used a torn Bible page as wadding for his gun. Hewlett decrees that all town residents shall surrender their firearms.

The next day, the townspeople line up outside the church to surrender their guns. The crowd parts as Rev. Tallmadge - Ben's father - arrives to surrender his firearms. He bitterly remarks to Hewlett that the church was once his.

At the tavern, rebels Walter Havens and Moses Paine meet in private. Walter urges Moses to burn the petition and meet him by his boat at moonrise.

Meanwhile, Rev. Tallmadge tells tavern patrons that the British took their church, their headstones, and now their guns. "Don't you see who your real enemies are?" he says. "Spoken like a true rebel," says Simcoe, who was lurking outside. He arrests Rev. Tallmadge.

At Whitehall, Hewlett tells Abe that the evidence -- the torn Bible page Simcoe found and a recently-fired gun -- points to Rev. Tallmadge as the sniper.

Moses visits Hewlett at Whitehall to surrender the petition. Hewlett tells Simcoe to erect the gallows and arrest everyone on the petition, including Moses. Desperate to thwart this new development, Abe offers to take the wounded Richard's place as the magistrate in the rebels' prosecution.

Caleb and Selah march north with Ben's troops. Caleb expresses his frustration to Ben that he couldn't meet Abe in person to relay that Selah is alive. Ben insists that dead drops are the safest communication method for everyone.

At the farm, Abe confirms to Anna that Moses surrendered the petition but says he will help Rev. Tallmadge and Lucas avoid prosecution. Meanwhile, Redcoats arrest the petition rebels and kill those trying to flee. Walter escapes.

The next day, townspeople fill the church for the rebels' trial. Abe interrogates Lucas with ferocity, intentionally causing the audience to take pity on Lucas.

At Whitehall, Mary looks after Richard and mentions that her marriage is still in turmoil. Richard tells her to go be with Abe at the church.

Abe interrogates Rev. Tallmadge with equal ferocity, saying the Reverend grew resentful after his congregation flocked to Richard. Abe demonstrates how the Reverend shot Richard and pretends to struggle as he loads the Reverend's rifle. Simcoe smugly takes the rifle from Abe but finds that the bullet that pierced Richard does not fit this gun. The audience gasps. The Reverend tells the room that if a man "is not free to make up his own mind, that is the worst form of tyranny." The townspeople cheer.

At Whitehall, Hewlett tells Abe that he will show mercy on the men by sparing their lives and sentencing them to 10 years on the Jersey instead. Abe calls it the same as a death sentence and reminds Hewlett that the bullet didn't match the Reverend's rifle. Hewlett stresses that this is an opportunity to banish a group of disloyal citizens.

Ben's scouts find Walter hiding in a ditch. Walter reports that Ben's father and Caleb's uncle have been arrested and may face death. Ben tells Caleb to round up the whaleboats. "We're going home," he says.

Inset of the Philidephia and surrounding counties