Belly of the Beast

View source
watch 01:25
Jurassic World: Dominion Dominates Fandom Wikis - The Loop
Do you like this video?
Play Sound
Belly of the Beast 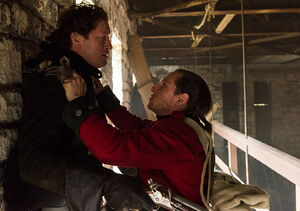 As Abe is thrust into battle, Ben appeals to General Washington. Townsend risks everything, while Caleb seeks redemption.

Benedict Arnold and his American Legion march down a war-torn street in Virginia, engulfed in battle with rebels. Abe Woodhull is forced to fire on the rebel combatants.

"If Arnold is in Virginia, that means that Clinton still resides in New York, the seat of power, and therefore still the prize. This army must maintain its readiness to invade."
―George Washington informing his generals of his plan.

George Washington’s generals propose a counterattack against Arnold in the south. Washington agrees to send Marquis de Lafayette but otherwise refuses to abandon York City. Washington proclaims he is offering 5,000 guineas to whomever brings Arnold down.

Mary Woodhull asks Ben Tallmadge to rescue Abe from Virginia. Ben vows to resign as Head of Intelligence so that he can rescue Abe, but orders Mary to learn more about Mrs. Bates before he leaves.

Arnold summons Abe to his quarters to ask for help selling goods that he’s looted in Virginia. Simcoe walks in and asks about the powder. He counsels Arnold against marching further south and expresses disapproval over Arnold’s looting. Arnold orders Abe to find suitable ports to funnel his profits through. Arnold dismisses them both.

Walking away from Arnold’s office, Simcoe threatens to kill Abe on the battlefield.

Abe walks into John Champe’s tent and Abe convinces Champe that they need to flee the camp before they’re forced to kill their own. Joseph Sturridge overhears their conversation.

Mary asks Caleb Brewster to rescue Abe from Virginia. Caleb tells Mary that he is a changed man and can no longer ride horses or throw his axe. Mary says Caleb is the kind of man who would do anything for his friends, and recites scripture, “Ask and ye shall receive.”

Caleb tenders his resignation to Ben and Alexander Hamilton, announcing his intentions to find a farmer friend in the south. Ben realizes that Caleb is going to find Abe.

General Cornwallis arrives in Virginia. Sergeant Dowling orders the men, Abe and Champe among them, to pack up their tents to make room for Cornwallis’s men.

Inside their tent, Champe tells Abe they should escape amid the commotion of Cornwallis’s army’s arrival. He gives Abe a gun and proposes they seek refuge with the French, who have a ship nearby. Sturridge enters the tent and reveals he knows Abe and Champe are rebel spies. Abe restrains Champe from killing Sturridge, who explains all he wants is to leave with them to get away from the war.

Cornwallis informs Simcoe and Arnold that he requested reinforcements from General Clinton and suggests they seize control of depots where rebels might try to resupply.

At night, Abe, Champe and Sturridge sneak out of the camp. While jumping the camp fence, Sturridge stumbles and accidentally shoots himself. Soldiers in camp hear the gunshot.

Abe tells Champe to run. As British soldiers descend on their location, Sturridge implores Abe to “catch him.” When the soldiers arrive, Abe tells them that he caught Sturridge trying to desert. A Ranger shoots Sturridge dead. Arnold doubles the guard so no more deserters can escape.

Robert Townsend visits Hercules Mulligan at his shop, discretely citing Mulligan’s “urgent” message. Mulligan tells him that his father-in-law, British Admiral Saunders, hired the Gazette to publish the Royal Navy Signal Book, which gives fighting instructions to British squadron commanders. Townsend offers to change the typeset and send different copies to different commanders to disrupt their communication with each other – realizing it would mean exposing himself as a spy, since the books would all come from the same place.

Cornwallis visits Arnold’s quarters and informs Arnold that Clinton refused to send more men and instead wants them to establish a naval post in Yorktown.

General Anthony Wayne urges Washington to send his men south but Washington refuses to abandon York City. Once the other commanders leave, Ben points out that everyone except Washington believes it better to strike in the south and accuses Washington of acting self-centered. Washington bristles and orders Ben to leave and turn over all intelligence to Hamilton.

Caleb joins up with rebels in Virginia headed to the battle in Blandford.

Cicero visits Abe in his tent. Abe tells Cicero that he plans to kill Simcoe the following day and asks Cicero to tell his family that it was his choice.

Arnold summons Abe and asks for his sales contacts before he heads to Yorktown. In a flashback, Arnold warns Cornwallis that their forces in Yorktown will be geographically vulnerable to French fleets. He draws a map to illustrate their weakness, but Cornwallis refuses to defy Clinton’s orders.

Back in the present, Arnold shows Abe the map that he drew for Cornwallis and complains that no one is heeding his advice, and that they only have enough powder and rations for a march, not a siege. Abe quietly steals the map.

The next morning at Blandford, Abe and the American Legion shoot at rebels from inside the upper levels of a parapet. Abe tries to make excuses to break away, Arnold’s map still in his pocket, but Dowling orders him to stay.

On the ground below, Caleb and his rebel crew join the battle at Blandford. Arnold sends Simcoe an order to flank the newly arrived rebels. Simcoe hands the order off to a subordinate and leaves to do “unfinished business.”

"Culper. Culper. It'll all be over soon. No more hiding. No more lying. Regards to your father."
―John Graves Simcoe to Abraham Woodhull.

Dowling orders the regiment to follow him outside, and Abe takes the opportunity to break off from the group. While outside, Abe sees Simcoe and they lock eyes across the courtyard. Abe turns around and hustles away, and Simcoe follows him back into the building with the parapet. Abe shoots at Simcoe but misses. He runs down a level on the parapet, with Simcoe coolly taunting him.

From the ground, Caleb sees Simcoe pursuing Abe on the parapet wall. As Simcoe raises his gun to shoot Abe at point-blank range, Caleb shoots Simcoe in the stomach. Abe rushes at Simcoe and throws him over the walkway railing onto a pile of bricks below. Simcoe gasps for air, indicating he’s alive, and Abe rushes downstairs. On the next level, he sees Simcoe’s body is missing and follows a trail of blood, picking up Simcoe’s gun and Arnold’s map that he had dropped.

British soldiers find Simcoe dragging himself across the floor, gravely wounded and covered in blood, and call for help. While the soldiers are distracted trying to sustain Simcoe, Abe levels his gun at Simcoe from across the room but decides not to shoot, choosing instead to get Arnold’s map to Washington. Abe leaves.

After Rivington has left for the night, Townsend uses Rivington’s press room and begins resetting the type for the Royal Navy Signal Book, creating different codes for each book. Rivington returns while Townsend is still manufacturing the different codes, and realizes that Townsend is a spy. Rivington agrees to keep Townsend’s secret on the condition that Townsend give up his stake in Rivington’s Corner and disappear. Townsend signs, and Rivington asks him if he’s going to finish. “We’ve already made a hundred copies; I’ll be damned if we waste more paper,” he says.

At night in secret, Mary tells Anna that Mrs. Bates is working alone and that her contact in the army is General Clinton. Mary offers to pass along fake intelligence to Mrs. Bates, who will then tell General Clinton.

Abe spots Lafayette’s ship on the river and surrenders to French soldiers on shore.

Abe gives Arnold’s map to Lafayette and explains that he is Ben’s spy, Samuel Culper. Lafayette questions Abe’s claim and his men restrain Abe and take him away.

"If Arnold is in Virginia, that means that Clinton still resides in New York, the seat of power, and therefore still the prize. This army must maintain its readiness to invade."
―George Washington informing his generals of his plan.

"Culper. Culper. It'll all be over soon. No more hiding. No more lying. Regards to your father."
―John Graves Simcoe to Abraham Woodhull.