Blade on the Feather

View source
watch 01:25
Jurassic World: Dominion Dominates Fandom Wikis - The Loop
Do you like this video?
Play Sound
Blade on the Feather 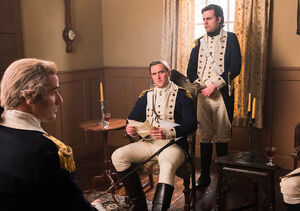 Benedict Arnold plots to turn over West Point to the British. André negotiates for Peggy. Abe plots revolt in Setauket.

John André informs General Clinton that Arnold has offered to surrender West Point in exchange for 20,000 pounds and command of a Loyalist battalion. Clinton agrees to pay 10,000 pounds. André says that Arnold requested a face-to-face meeting with an officer.

At West Point, Arnold orders Colonel Jameson to relocate to an outpost further south on the Hudson River and to file observational reports each morning.

Clinton cautions André against meeting Arnold in person, saying he could be hanged as a spy if caught. André assures Clinton he will not take any incriminating documents from Arnold and that he will wear his uniform, which will allow him to claim he is meeting Arnold under a flag of truce.

Arnold receives a message that General Washington will be visiting West Point for an unexpected visit.

In Setauket, Captain Simcoe holds villager Elias Appleby at knifepoint and reveals that he knows of Elias's incestuous relationship with his sister. Simcoe says Robert Rogers has been using people's secrets to blackmail them into sheltering him. Elias denies any knowledge of Rogers, but Simcoe nevertheless torches his barn.

At Setauket Tavern, Abe Woodhull overhears Elias and two villagers grumbling about Simcoe's rampage. Abe proposes they steal their confiscated firearms from the church and fight back.

André writes a letter to Clinton informing him of Culper's identity. He gives the letter to Abigail to send out via courier.

Philomena Cheer stops André in the street and informs him that she's pregnant. He postpones further discussion until he returns from his business upriver.

Washington arrives at West Point with a small entourage, including Ben Tallmadge, Alexander Hamilton and the Marquis de Lafayette.

Arnold and Peggy Shippen welcome Washington into their home. A soldier delivers a dispatch to Arnold from "John Anderson" (André's code name). Washington insists a flag of truce "is always of import." Arnold dismissively reads the letter aloud, then tosses it in the fire.

That night, Arnold gets dressed and reveals to Peggy that he is meeting with André to negotiate his terms.

The HMS Vulture sails up the Hudson. André instructs the captain to drop anchor south of West Point. Rogers watches the ship from shore.

Arnold bribes two bargemen to row out to the HMS Vulture.

In a cabin, Arnold offers to sell the plans for West Point for 20,000 pounds. André counter-offers with 10,000 pounds. Arnold ups the ante and offers to deliver Washington himself to the British. André agrees to 20,000 if Arnold breaks off his engagement to Peggy. Arnold informs André that they're already married. They're interrupted by the sounds of cannonballs.

Outside, Colonel Jameson orders artillerymen to fire at the HMS Vulture. He chases off a group of rebel skinners who tipped him off to the ship.

André tells Arnold that his ship is retreating downstream. Arnold advises him to walk 15 miles to the nearest British outpost. He gives him plain clothes and writes him a pass to get through checkpoints. André reluctantly takes the West Point documents with him. Arnold again demands 20,000 pounds. "Peggy," says André.

The skinners meet with Rogers and demand payment for alerting Jameson. Rogers enlists them to help hunt down André.

At Whitehall, Simcoe warns Richard Woodhull that Abe has been talking rebellion.

Richard finds Abe at Setauket Tavern and warns him against talking treason. Abe urges Richard to lead the town. Simcoe enters the tavern and smashes a glass over Captain Wakefield's head, forcing him to give up his table.

The next day, Abe pulls Wakefield aside and offers to take down Simcoe if Wakefield leaves the arsenal at the church unlocked.

The skinners stop André in the woods and beat him up. Rogers reveals himself to André and instructs the skinners to take André to Jameson.

The skinners bring André to Jameson. Jameson sends a report to Arnold in which he says he is holding "John Anderson" until further notice.

Washington, Arnold and Lafayette discuss military strategies. Arnold asks Washington to prolong his stay at West Point so that he can discuss a potential strategy. Ben offers to investigate the cannon fire from the previous night but Arnold declines his offer. Washington quietly gives Ben the go-ahead to investigate.

At Jameson's outpost, Jameson informs Ben that the skinners brought him a man by the name of John Anderson, who was carrying plans of West Point in Arnold's handwriting. Ben deduces Arnold's treachery and races back to West Point.

Arnold runs to his room and tells Peggy that André has been captured and that Ben will soon learn about their involvement. He kisses her and flees.

Arnold orders the bargemen to prepare a boat.

Caleb barges into Arnold's residence and informs Washington that Arnold is a traitor.

Ben sees Arnold escaping on the boat and aims his gun. Arnold salutes. Ben shoots... and intentionally misses. Arnold gets away.

Abe sneaks into the church to steal the guns but is ambushed by Simcoe and Wakefield. Abe punches Simcoe. Queen's Rangers wrestle him to the ground. "Get a rope," Simcoe orders Wakefield.