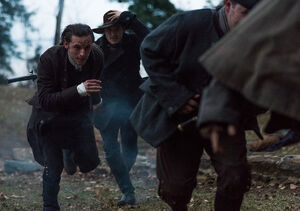 Ben Tallmadge and Walter Havens bring Abe Woodhull and Richard Woodhull to a mill in Lyme, Connecticut, for the hostage exchange.

Ben ties Abe and Richard to a post inside the mill. Richard acknowledges to Abe that Ben had no choice but to shoot Captain Wakefield but he wonders how to reconcile his conflicted feelings over the shooting.

Benedict Arnold complains to Peggy Shippen about her spending habits. Peggy says her spending is for appearances, which are necessary to be welcome into the houses of influence.

Arnold meets with Mr. Parker, who he has hired to deliver Caleb Brewster and the 500-pound ransom to the Continentals for the hostage exchange. Arnold tells Mr. Parker his rewards will come when he establishes a regiment and will need a courier for undocumented goods -- “spoils that this army can spare.” Peggy eavesdrops on their conversation from another room.

Akinbode plays cards with men in the street and overhears Mr. Parker trying to recruit men for a mission. Akinbode sees Rangers congregating nearby and volunteers for the mission to escape the Rangers’ notice.

"No survivors."
―John Graves Simcoe's orders to a Queen's Ranger.

Simcoe orders one of his Rangers to gather a dozen men, disguise themselves as bandits and kill everyone at the hostage exchange.

Mr. Parker and Akinbode go to Caleb’s prison cell. Akinbode recognizes Caleb and says they once tried to kill each other years ago. They carry Caleb out of the cell.

At the New Windsor camp, a soldier approaches Anna Strong and urges her to speak with Ben about the growing resentment among soldiers and officers concerning their lack of pay. He warns that there may be an uprising.

Abigail and Cicero pay a surprise visit to Peggy. Peggy happily greets them and fires her servant, Zipporah so that Abigail can take her place. Zipporah warns that a black “vagrant” from the north had been looking for Abigail and Cicero.

Mr. Parker’s crew arrives on the Connecticut shore. Caleb wakes up and recognizes Akinbode as a Ranger.

At home, Peggy tells Arnold that she sent Zipporah away and hired Abigail and Cicero. Arnold refuses to hire John André’s former servants but eventually relents.

Abe and Richard surmise that they will be taken to Colonel Cooke in York City after the exchange. Abe considers sneaking a look at Cooke’s treasury books to ascertain where the British are sending their army.

Mr. Parker’s crew brings Caleb to the mill. Ben brings Abe and Richard outside for the exchange. Meanwhile, Simcoe’s Rangers quietly prepare their guns on the mill’s perimeter.

Simcoe plays pool at Rivington's Corner to give himself an alibi while his Rangers carry out the massacre.

The Continentals hand over Richard in exchange for Caleb.

A Ranger, Thorburn, recognizes Akinbode from the perimeter. Akinbode hears the Rangers whistle and warns everyone that something is amiss. The Rangers open fire, and Richard is shot in the head, killing him. Havens carries Caleb inside the mill, while Ben, Abe and two other men – Pitt and Spelling -- rush inside as well.

Akinbode and his crew run to the shore to escape in their boat. A group of three Rangers follow him. Akinbode kills the Rangers, only to turn around and find that his comrades have left in the boat without him. He grabs the dead Rangers’ guns and heads back toward the mill.

Pitt quietly bleeds to death from a gunshot wound next to Abe. Ben peers outside a window and counts the assailants. He sees one of the Rangers outside, Coffer, steal the bag filled with the 500-pound ransom. Ben voices his confusion about why the men won’t leave since they have the money, and Caleb says they’re there to kill them. Havens tries to formulate a plan to talk to the men outside, but is shot dead while standing in front of an open window.

Arnold stops by Rivington’s Corner. Simcoe apologizes to him about Caleb and notes Arnold’s sour mood. Arnold complains about Peggy’s endless requests. Simcoe wonders if Philomena’s arrest is related to a disagreement that he observed between Peggy and Philomena at the Kennedy House soiree. Arnold abruptly leaves.

Ben sees that the men outside preparing to burn them out of the mill. He finds a tunnel leading outside and suggests one of them sneak outside to create a flank. Abe volunteers despite Ben’s protests.

Abe uses the tunnel to sneak outside with two pistols. He sees the Ranger Coffer looting from Richard’s dead body. He silently aims one of the pistols at him but pulls back when the other Rangers shout to Coffer.

Inside the mill, Ben, Caleb and Spelling rig together their decoy plan.

Outside, Abe kneels beside Richard’s corpse. He closes his father’s open eyes.

The Rangers charge toward the mill with torches in hand. The mill door flies open. The Rangers open fire on figures in the doorway, only to find that the figures are the corpses of Havens and Pitt.

Abe chases Coffer and pummels him with his pistol. Coffer strangles Abe. As he loses consciousness, Abe sees Akinbode kill Coffer and take the money.

Anna speaks to Alexander Hamilton about the discontent among soldiers and officers. Hamilton informs her that he has already written to Congress numerous times about the needs of the army, but no one will listen. Anna points out that her husband is a Congressman. Hamilton dismissively suggests that she herself write to Congress to forestall mutiny.

Anna writes a letter to Selah, informing him that she is safely in the New Windsor camp. She describes the difficult conditions that the army is enduring and worries it may lead to a revolt that could upend their cause. She implores him to come witness the conditions himself.

Arnold speaks to Philomena in prison and informs her that Freddy Morgan testified against her. Philomena tells him that Major André paid Freddy to arrange her hair. “And only when he wished for me to resemble Miss Shippen,” she reveals.

Arnold angrily confronts Peggy at home about her relationship with John André. He reveals that John André had demanded Arnold break off his engagement with Peggy and offered him 10,000 pounds. Peggy tells him she wishes he would have died instead of John. She storms out of the room. Arnold opens a gift box that Peggy had placed for him on the dinner table. He finds baby shoes inside.

Akinbode runs through the woods with the ransom money. He pockets several coins then buries the rest of the money.

Ben rides a wagon through the woods with Caleb, Abe and Richard’s body in the back. Abe holds Richard’s hand.

"No survivors."
―John Graves Simcoe's orders to a Queen's Ranger.

"He must be in position by now, eh? You ready?"
"Always."
―Benjamin Tallmadge and Caleb Brewster.