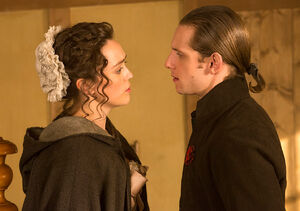 At their inn in New York, Abe wishes Anna luck as she prepares to go to the HMS Jersey to get Selah released. She describes her plan to move to Connecticut, since she and Selah have nothing left on Long Island. She blames her predicament on Abe for ending their engagement. Abe tells Anna some things aren't meant to be.

Caleb looks for Samuel at the POW exchange and is surprised to see Selah instead. Nearby, Robert Rogers hides in the woods, rifle at the ready, waiting for Ben to arrive.

The HMS Jersey warden meets Anna on the Jersey. He looks up Selah's name in his log: "Deceased." Anna is shocked.

Unable to wait for Caleb to return with Samuel, Ben leaves headquarters to greet his brother.

Selah tells Caleb that Samuel is dead and that Rogers pulled him off the prison ship. Sensing a trap, Caleb throws Selah to the ground. Rogers shoots at Caleb and misses, wounding a soldier. Both sides brandish weapons, and the British captain, Captain Blake, takes some of his men to look for the shooter. He finds Rogers and rebukes him for firing "under the flag of truce."

Abe concludes negotiating the sale of Selah and Anna's cauliflower to Cooke and asks for suggestions for nighttime entertainment. Cooke offers to take him to a dinner at John André's house.

The Continental captain, Captain Henry, refuses to bring Selah back to camp with the rest of the Continental POWs since he is not Samuel Tallmadge. Caleb instructs Henry to find Ben at camp and tell him "Genevieve."

Rogers, Jordan and Awasos hunt for Caleb and Selah in the woods.

At the inn, Anna tells Abe that Selah is dead. Seeking revenge, she insists on accompanying Abe to André's dinner. Abe refuses to take her.

In the woods, Caleb tells Selah that "Genevieve" is a code word indicating a meeting point that Ben will understand. They duck for cover as Rogers fires on them, pinning them down.

Ben encounters Henry's convoy and learns that they were ambushed by Queen's Rangers. Henry conveys Caleb's code word, and Ben takes off to find Caleb and Selah.

Anna tracks down Abigail at a market near André's house and demands help getting into André's dinner.

At DeJong Tavern, formerly Strong Tavern, Simcoe tells Robeson he's investigating a rebel conspiracy and inquires about Ben, Caleb and Abe. Robeson advises Simcoe to find the rebel sympathizers by tracking down the petition for the New York convention.

Abe arrives at the exclusive dinner party solo and is ushered into a room of carousing Redcoats, who are already well into a night of singing, dancing, and games including the "Who would you kill?" challenge. Cooke introduces Abe to André, whom Abe is nervous to meet.

Daniel Weir, the quartermaster who's been buying Abe's product, asks Abe for help with obtaining cordwood from rebel land. "You provide the names, we provide the attainders," Weir says.

Drawn by the sound of gunfire, Ben arrives at the skirmish and shoots Awasos while still on horseback. He then ducks for cover with Caleb as Rogers fires back. Both sides are now pinned down and at a standoff.

At André's house, Abigail asks the corporal guarding the front door if a woman with brown hair and a coral dress came by. "She's late," Abigail says. "The Major won't be pleased." Soon after, Anna arrives at André's door. The corporal, recognizing her from Abigail's description, lets her in.

Inside, a group of dolled-up women snicker at Anna's plain dress. Philomena tells Anna to pay them no mind. They file into the dining room as Abe is singing a song, stopping him mid-verse as he sees Anna is among them. The women begin to mingle with the Redcoats, and Anna sidles onto Weir's lap. As soon as he gets a chance, Abe reminds Anna that she promised to stay behind. "Promises get broken," she says.

Blake arrives at André's house and tells André about Rogers firing on the prisoner exchange. A frustrated André tells Blake to retrieve Rogers, and grants him permission to kill Rogers if he resists.

Rogers tends to Awasos' wound. Meanwhile, Selah tells Ben about Samuel's final days on the Jersey. Ben cries and vows to kill Rogers for using Samuel's name to entrap him.

Rogers remarks to Jordan that Ben is a good shot. "You like him," Jordan observes. "War makes brothers of us all," Rogers says.

Abigail tells Abe that Anna plans to break into André's bedroom to find his log of war details. Meanwhile, Anna leaves the room and invites Weir to follow her upstairs.

In the woods, Blake arrives with an envoy and declares an end to the standoff by order of John André.

Anna sneaks into André's bedroom and discovers a book of encoded entries. Abe follows her, pushes her against a wall, and kisses her. She resists, saying he only wants her because he's jealous, but that otherwise he lives too cautiously. Weir discovers them together in the bedroom and angrily leaves. Once he's gone, Abe demands Anna tell him where André's book is.

Returning to the dining room, Weir tells Cooke to kick Abe out. Meanwhile, Abe hurriedly transcribes a page from André's book then brusquely asks if Anna was actually going to sleep with Weir. Cooke walks in and asks Abe to leave.

In the dining room, Cooke announces Abe's departure. The Redcoats insist Abe play "the challenge" game before leaving: Who would he kill if he could get away with it? "I would kill the man who killed my brother," Abe replies, and relays the story of how his brother was killed in a riot started by a "drunk fool" who placed a Phrygian cap on the Liberty Pole (the riot at King's College that Abe recalled in Episode 3, "Of Cabbages and Kings.")

In the woods, Rogers tells Blake that Selah is not who he says he is. "This man is my only brother, Captain Samuel Tallmadge," Ben lies. Blake orders Rogers to report to André. Rogers and Ben glare at one another -- though this battle has ended, the clash between them is far from over.

At Whitehall, Simcoe tells Hewlett about the petition. Hewlett recalls Richard mentioning a petition that named Selah Strong as a delegate to an illegal body. He encourages Simcoe to "quietly" continue his search for Setauket rebels.

Anna finds Abe waiting in their room at the inn. "You started the riots?" she asks. "Who else knows?" "Just you," he replies. She kisses him and they make love.