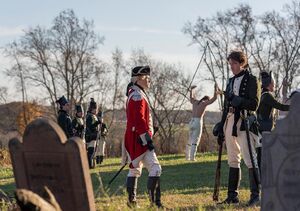 Anna tries to save the ring after Abe's cover is blown. Benedict Arnold seeks Washington's help against charges of treason. Townsend sends a signal.

John André orders a drink at Rivington's Corner in York City. He overhears a conversation between the Governor William Tryon, Mayor David Matthews and James Rivington, publisher of the Royal Gazette and owner of the establishment. Rivington shows his companions the lead story of the next day's Gazette: "Washington Killed By Own Men." The mayor and governor inform Rivington that the assassination attempt on George Washington was unsuccessful and that they're awaiting further details from their spy in Washington's camp.

Rivington runs to the Royal Gazette offices and instructs his staff to replace the lead story with advertisements.

André joins the governor and mayor and informs them that he, too, has a spy in Washington's camp. The governor reveals that their spy is Reverend Worthington. Robert Townsend overhears their conversation and purchases a newspaper ad from Rivington.

At Washington's camp in Valley Forge, Worthington gives a sermon to a crowd of soldiers, including Ben Tallmadge. Caleb Brewster pulls Ben aside and shows him an ad in the Royal Gazette a coded message from Culper Jr., a.k.a. Townsend, to alert them that he is sending new intelligence via his father, Samuel Townsend.

A Queen's Ranger arrives in Setauket to set up camp for John Graves Simcoe's men. The Redcoats jump and beat him.

At Whitehall, Major Hewlett and Richard Woodhull confront Abe Woodhull about his spying. Hewlett demands the names of Abe's co-conspirators and aims his pistol when Abe runs to pick up Thomas. Abe reminds Hewlett that he enabled Abe to travel to New York and would likely be punished if Abe were outed as a spy. Hewlett permits Abe to leave Whitehall with Thomas only after Mary Woodhull offers to become Hewlett's hostage, ensuring Abe won't flee Setauket.

Abe decamps to a cabin on his property. Robert Rogers brings Abe a copy of the Royal Gazette and, having read the letters in Abe's root cellar, correctly guesses the true nature of Townsend's ad. With Abe unable to leave Setauket, Rogers offers to retrieve the intelligence from Samuel.

The Redcoats torture their captive Ranger. Simcoe arrives with his men and beats one of the Redcoats bloody.

Hewlett learns that Simcoe has taken four Redcoats hostage. Moments later, Simcoe arrives at Whitehall under a flag of truce.

Hewlett threatens to wage war if Simcoe does not release the hostages. Simcoe speculates that someone is manipulating them into fighting each other and informs Hewlett that he's looking for a spy named Samuel Culper. Anna Strong overhears the conversation.

In Valley Forge, Benedict Arnold fumes to Washington about the warrant against him and wonders how to shake the rumors of treason that have plagued him. Washington suggests he apply for a court martial and restore his honor in court.

At Rivington's Corner, Townsend gives his father an encoded bible to pass onto Abe. Rivington inserts himself into their conversation and introduces himself to Samuel.

At Whitehall, Anna suggests to Hewlett that he use Abe and his rebels to kill Simcoe once and for all.

Anna goes to Abe with her plan, suggesting he and Hewlett lure Simcoe into an ambush from Caleb. Abe reluctantly agrees to the plan after she tells him that Simcoe knows the name Culper.

Rogers meets Samuel Townsend in Oyster Bay. Though Samuel is initially wary, Rogers gains his trust by describing his hatred for the king. Samuel gives Rogers the bible.

At Rivington's Corner, John André challenges Robert Townsend to a game of draughts. Townsend glimpses a picture of Peggy Shippen in André's sketchbook. Philomena, André's former lover, enters the establishment and makes eyes at André, who does not reciprocate. André formally introduces himself to Townsend, who now realizes he's been playing draughts with the head of British intelligence.

Abe meets with Hewlett to discuss Anna's plan. Abe suggests they bait Simcoe with the name Culper. Hewlett orders Abe to leave Setauket with Mary and Thomas after they kill Simcoe.

The next day, Hewlett tells Simcoe that he had compiled a list of possible rebels when he first arrived on Long Island. He shows Simcoe the list and points out the name Samuel Culper of Rocky Point. Simcoe mobilizes his men to ride to Rocky Point.

Abe finds Rogers in his root cellar, brushing reagent on the bible, which has been written in invisible ink. The secret message reveals that Reverend Worthington is a traitor. Rogers insists on joining Abe when he delivers the intelligence to Caleb.

Abe goes to the drop and gives the intelligence directly to Caleb, while Rogers hides nearby. Anna joins them and, with Abe, describes the plan to lure Simcoe to Rocky Point, at which point Caleb will ambush him. Abe reveals that he will then kill Hewlett. Anna protests. "It's me or him," Abe says.

Caleb delivers Townsend's intelligence to Ben. They glare at Reverend Worthington as he sermonizes to soldiers.

At Whitehall, Hewlett informs Anna that Simcoe is departing the next day for Rocky Point. Anna asks if he's ever thought about leaving Long Island and returning to Scotland. He takes her hand and admits his post has made him a cynical man. "You're the only person that I can trust," he says. She bursts into tears. He kisses her.