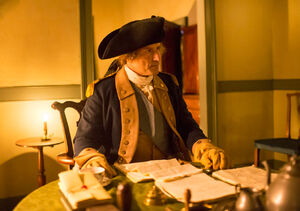 As Christmas Eve is celebrated around Setauket, Richard signs an attainder against Selah Strong, which Hewlett then has posted at Strong Manor. Anna reads it and zeroes in on one of the included phrases: "...grants freedom to his slaves."

Cicero (son of Abigail, Anna's housemaid) reads the attainder and tells the slaves that they're free. They celebrate.

Outside the church, Abe glares at the excavated headstones. One of them is from his brother Thomas' grave.

The next day, Abe visits Richard, and there is lingering tension between them over the removal of the gravestones. Abe tells Richard he wants to go to New York to try and sell additional goods to Howe's army, and asks for Colonel Cooke's letter that will allow him to pass through British checkpoints. Richard refuses to give it to him, and instead encourages Abe to spend Christmas with his family.

Afterwards, Abe sneaks into Hewlett's room and copies a letter from Hewlett's desk.

At the church, Anna appeals the attainder to Hewlett, arguing that it's cruel to free slaves on short notice because they don't know how to fend for themselves. Hewlett tells her he's shipping the male slaves off to war and has made arrangements for Abigail.

Jordan, a slave, flirts with Abigail at Strong Manor. She rebuffs him. He says he knows she can read, but agrees to keep her secret safe.

At the Continental camp, Ben is told to gear up for a secret mission. He and Caleb sail into the Delaware River and, to their surprise, find themselves amid an entire fleet.

At Strong Manor, Anna tells Abigail that Hewlett is sending her to New York to work for a British officer. Abigail begs Anna to help her bring Cicero, but Anna says her pleas with Hewlett failed.

Outside, Abe tells Anna that the British are recalling General Cornwallis to London. He asks her to hang a black petticoat so that he can pass the intelligence on to Caleb. Discouraged by the attainder, Anna tells him the fight is over and goes inside.

As Ben and Caleb's boat approaches shore, the boat tips, and the swivel gun mounted on the side nearly falls off. Ben jumps overboard to save it and is immediately stunned by the icy water.

Ben drifts in and out of consciousness as Caleb watches over him. When Ben finally awakens, it's the new year, and Caleb tells him the men have marched on to Trenton.

Rogers sneaks into City Hall and crashes a dinner between Philomena and General Lee. Lee recognizes Rogers and introduces him to "Miss Endicott" as a hero of the Seven Years War.

On the Woodhull farm, Mary prepares to go to Whitehall, where Richard is celebrating the feast of the Epiphany. She says Thomas has the croup and would benefit from the warmth and servants at Whitehall. Still angry with Richard over the headstones, Abe does not join her.

Hewlett informs the male slaves of Strong Manor that they will join the war effort in New York, after which they'll receive papers granting their freedom.

Abigail says goodbye to Cicero and urges him to keep his reading skills a secret. She then tells Anna she knows about the petticoat signal and the rebel schemes with Abe and Caleb. She offers to spy on her future employer, Major John André, if Anna protects Cicero while she's away. Anna agrees.

Anna visits Abe to tell him that Abigail knows what they've been doing. Drunk on whiskey, Abe yells at Anna for her earlier pessimism. She goes to storm out, but Abe kisses her. She returns the kiss. Baker interrupts them and bluntly recommends that Abe join his family at Whitehall.

In Trenton, Ben and Caleb run into Continental militia and learn that the army successfully ambushed the Hessian soldiers. "Woodhull!" Ben yelps, realizing that Washington heeded Abe's report. A militiaman tells them that Washington led most of the soldiers onward to Princeton but left a small group behind to act as decoys. The group sets several fires along the bank of the creek, then runs about and makes a lot of noise to give the impression that a much larger force is encamping for the night.

Across the creek, John André recommends to Cornwallis that they attack the rebels now. Cornwallis, believing Washington's entire force is on the opposite bank, decides against a night attack.

Back at City Hall, Lee criticizes Washington for getting so many of his men killed. "At least he isn't a traitor like you," Rogers says, confronting Lee for betraying the Connecticut dragoons. He then asks for the name of the dragoon who escaped. "Benjamin Tallmadge," Lee readily says.

The next morning, Cornwallis raids the opposite bank, only to find it abandoned.

Anna comforts Cicero as he cries.

Abe is welcomed by his family at Whitehall, where they dine with Hewlett and other Redcoats.

At Continental headquarters in Morristown, N.J., soldiers chant, "Trenton, Princeton! Jersey is ours again!" and cheer as Washington enters the room.

Washington proceeds into a study, where Ben awaits. "Now, just who is Abraham Woodhull?" Washington asks.