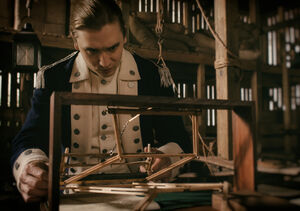 Ben sets a trap to capture a traitor in camp. Richard discovers Abe is conspiring with Major Hewlett. Caleb collides with Robert Rogers.

After pain from his bullet wound awakens him in the night, Richard goes for a walk around Whitehall. Through a window, he sees Abe and Hewlett secretly meeting. The next morning, he pulls Abe aside and demands to know why, but Abe dodges the question.

Abe meets Anna in the woods and asks her to signal Caleb so he can pass on his intel from York City. Anna shows Abe the “General Lee a traitor” note from Abigail, then asks how he was able to collect intelligence with Corporal Eastin escorting him. Abe reveals he’s been pretending to be a spy for Hewlett. Hurt that Abe didn’t clue her in, Anna expresses regret over abandoning Selah. “I did it for you, Abe,” she says ruefully. “For a life I can’t have.” Gathering herself, she offers to watch Hewlett while Abe is in York City: “He offered me his friendship. I’ll say yes.”

Ben vents to Caleb and Sackett about Washington’s refusal to heed Abigail’s intel. Sackett takes Ben and Caleb into his barn filled with spycraft inventions and explains how he plans to turn Abigail into a verified asset. First step: send Abigail instructions on properly communicating, via a hidden compartment in a whittled toy boat that will be passed off as the work of her son. As Sackett challenges Caleb to learn to drill into a wax bust and extract a message in less than two minutes, Ben notices Sackett’s polygraph duplicator, and hatches a plan that will prove Lee is a traitor.

Peggy Shippen visits John André at a Philadelphia theater house where André is directing a military production of Taming of the Shrew. André asks her to write a letter to Benedict Arnold inquiring about his health. Feeling used, an offended Peggy refuses.

In a medical tent, Benedict Arnold screams in pain while a doctor sets a leg he broke in battle. Washington informs Arnold he’s been promoted to Major General, but will still be subordinate to the same people. Arnold seethes, pointing out he’s won more battles than his superiors. “We must all continue to make sacrifices,” Washington says. “What do you know of sacrifice?” Arnold shoots back, noting he does not come from a wealthy family like Washington does.

After composing a fake letter to Lee disparaging Washington, Ben uses the polygraph duplicator to sign it with a replication of General Horatio Gates’ signature. Meanwhile, Caleb masters drilling into the wax bust, and Sackett sends him to the home of Dr. Charles Hallum in Hackensack, New Jersey – the destination of the King George bust shipped from London by Patience Wright.

Robert Rogers arrives in Brooklyn Harbor. Waving his King’s Messenger badge, he takes a pistol and a horse from the Redcoat sentries.

In the wilderness outside York City, Simcoe runs a bayonet drill with the Queen’s Rangers. Pulling Jordan aside, he hands him his freedom papers and appoints him second-in-command, noting Jordan is the only man there who he’s certain doesn’t want him dead.

In the medical tent, Ben introduces himself to Arnold as Arnold writes a resignation letter to Congress. As they chat, Ben slips the forged letter to Lee into Arnold’s outgoing mail.

At Whitehall, Hewlett walks in on Richard snooping in his office. Richard admits to seeing Abe’s and Hewlett’s secret meeting, and says he’s worried he’s being excluded. Hewlett explains Abe’s plan to root out rebels in York City. Richard asks Hewlett not to tell Abe that he knows about it.

Peggy attends André’s theater production. Afterwards, she apologizes for being harsh, and tells him she sent a letter to Arnold after all.

In Hackensack, Caleb successfully sneaks inside Dr. Hallum’s home, but his mission to find the bust is interrupted when Robert Rogers knocks on the front door. Caleb overhears Hallum tell Rogers the bust never arrived because it was seized by rebel privateers from a ship called the Revenge. Rogers knows the ship's captain, Ryder, and vows to track him down. Caleb also knows Ryder -- and knows he needs to find him first.

The next day, Sackett purposely bumps into a mail courier. As Ben helps the courier pick mail up from the ground, he fishes out Lee’s reply to the forged letter.

In Washington’s office, Ben reads Lee’s response aloud, and urges Washington to take action. Washington angrily rebukes Ben, telling him they cannot appear divided and weak because it will jeopardize a potential alliance with France.

At Whitehall, Richard watches Abe pretend to immerse himself in law books. They exchange false smiles.

"Seems our Culper Ring is alive and well."
―George Washington to Benjamin Tallmadge.

"It is better to offer no excuse than a bad one."
―George Washington to Benjamin Tallmadge.