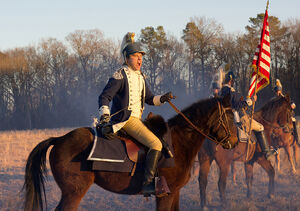 At DeJong Tavern, a group of Redcoats drink in a room adjoining another room full of imbibing Queen's Rangers. Anna covertly replaces Corporal Eastin’s flask with a flask belonging to McGinnis. A Ranger recognizes McInnis’ flask and demands to know where it came from, igniting a brawl between the Rangers and Redcoats.

Outside, Simcoe confronts Abe about the disappearances of McInnis and Tanner. They’re interrupted by the brawling Rangers and Redcoats as their fight spills into the street. Hewlett arrives on the scene and orders Simcoe and his men to leave Setauket. Simcoe informs Hewlett that he’s been called to New Jersey by John André, but will return when he’s done.

In New Jersey, André convinces General Clinton to expose their retreating army just enough to lure Washington’s men into attacking, at which point Cornwallis’ men will ambush them. He notes that General Lee is leading half of Washington’s army into his trap.

Meanwhile, Lee commands his men to attack the British as they cross New Jersey, assuring his men that they’ll outnumber the Redcoats 6,000 to 1,500. When Ben asks how Lee came to know the British troop numbers, Lee attributes it to his scouts, then assigns Ben to lead the charge.

At Whitehall, Hewlett orders Abe to compile his final spy report so he can send it to André as proof that the dangerous spies are in York City — news he hopes will put an end to Simcoe’s spy-hunting mission on Long Island. Richard, who overhears the conversation, advises Abe to run, noting that André will see right through his story.

In the spy cave, Abe asks Anna to lure Hewlett to the waterfront so he can assassinate him and prevent the false spy report from reaching André. Anna refuses and remarks that prison has changed Abe.

As Anna leaves the spy cave, someone watches her from afar.

Peggy arrives at Benedict Arnold’s house and is shocked to learn her father has given his blessing to Arnold’s marriage proposal. In private, Judge Shippen tells her that Arnold threatened their family if he didn’t give his consent to the marriage.

Abigail reunites with Cicero and Jordan in York City. Jordan asks Abigail to flee to Canada with him. When she hesitates, he urges her to be ready the next time he comes to York City.

In Setauket, Abe shares his final spy report with Hewlett, who explains his plans to encrypt the report and send it to André via Eastin. Abe quietly sneaks up behind Hewlett with his stiletto knife at the ready, but is interrupted by Mary, who claims Thomas has a fever.

Mary brings Abe to their bedroom, where Anna is waiting for them, and reveals that Anna told her about Abe’s plot to kill Hewlett. Mary suggests Abe kill Eastin instead, using Richard’s hidden pistol, and frame Simcoe for the murder. Anna leaves in disgust. Mary continues, telling Abe to forge André’s reply to make it sound like André is not interested in pursuing Hewlett’s lead.

In New Jersey, Ben leads his dragoons into battle, only to realize that Lee has led them into a trap. Caleb arrives with Townsend’s letter and warns Ben of the plot to harm Washington.

Clinton and André watch from a hilltop as Redcoats fire on Ben’s dragoons. As Simcoe leads his Rangers into the fray, Bradford orders his men to fall back.

Ben yells at Lee for pulling back instead of holding the line as Washington expected. To their surprise, Washington arrives with reinforcements and demands to know why Lee is retreating. He orders Lee to the rear, then barks out orders to attack the enemy.

Clinton and André watch unhappily as the Patriots gain the upper hand and win the battle.

In Philadelphia, Peggy asks Arnold if they can postpone the wedding until her oldest sister is married. Arnold angrily fumes that he’s tired of waiting for what he deserves, but readily acquiesces when Peggy offers herself up to him. As they have sex, Peggy cries quietly and clutches the braid that André gave her.

At his new home in York City, André drunkenly laments his battlefield loss and his abandonment of Peggy. “To General Benedict Arnold, may his treachery bring us victory and may victory bring me Peggy,” he tells Abigail, revealing his plot to turn Arnold to her.

In the hallway, Cicero asks Abigail what André is talking about. “None of our business,” Abigail says.

Richard asks Mary if she’s seen Abe or his pistol. She lies and tells him Abe is outside with Thomas.

In the woods, Abe shoots Eastin dead as he gallops toward York City. As he retrieves the spy report from Eastin’s body, Robert Rogers sneaks up behind him and abducts him.

Back at camp, Ben and Caleb knock Bradford unconscious.

In his tent, Washington tells Ben that he knew about Lee’s treachery thanks to the intelligence from agent 355 — Abigail. Ben informs Washington that Robert Townsend is their new contact in York City, and that Townsend already uncovered a conspiracy plot against Washington that includes Bradford. Ben asks Washington’s guard, Hickey, to bring Bradford to the tent.

Hickey goes to the holding cell and readies his knife to kill Bradford, stating that they’ll both be discovered. Caleb emerges from the shadows and catches Hickey red-handed.

Caleb arrives in Washington’s tent to report that Hickey and Bradford have both been secured. Washington declares that as long as the Culper Ring remains secret, it is safe.

In Setauket, Rogers holds Abe captive in the spy cave and reveals that he knows the identity of everyone in the Culper Ring. He vows to use Abe to get his revenge on André. “Let an old trapper show you how to set a proper trap,” he says.