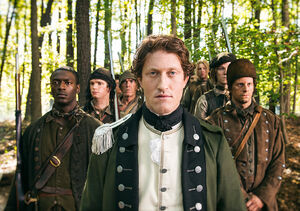 Abe arrives at the Brooklyn Ferry checkpoint with Eastin, his escort. Eastin suspiciously wonders why Abe needs an escort on the road but not while in the city. Meanwhile, Abe takes mental notes on the military activity and observes that the British naval presence is still strong.

In Philadelphia, Captain Simcoe scribbles numbers into a ledger at the commissary, where he’s been reassigned while awaiting his courtmartial. A supervisor mocks a love letter that Simcoe has written to Anna.

Simcoe receives a package from John André containing a steak knife and letter. He brandishes the knife at his supervisor and declares that he’s been relieved of his duties and summoned by André. With a smug grin, he ditches his post.

André tells Clinton that he’s planning to turn the allegiances of a rebel who has Washington’s trust: General Benedict Arnold. Clinton scoffs at such an ambitious plan. André points out that Arnold never received due credit for winning the battle at Saratoga and predicts that Arnold’s festering ego will make him ripe for turning.

Abe checks into a boarding house and asks the owner to boil a dozen eggs for him. He then asks some fellow boarders where all the soldiers have gone in the city. A boarder tells him that sailors have been building ships on the west wharf. The owner suspiciously watches Abe leave.

Abe traverses the streets of York City, taking copious notes in his concealed notepad. He estimates that an attack of 5,000 men could take over the city and end the war.

In Setauket, Mary sits with her sewing circle and a new addition: Anna. Mary suggests they organize a charity for the families of soldiers who’ve died in battle. When her companions complain about costs, Anna suggests they secure cheap provisions from a privateer. Mary smiles gratefully at Anna.

Hewlett interrupts and asks Mary if she has received a heavy package for him from London. Mary offers to look out for it. He shyly notices Anna and makes awkward conversation with her. The ladies giggle after he leaves, noting his attraction to Anna.

Abigail arrives at André’s house to find Simcoe waiting for André. Simcoe recognizes her from Strong Manor and speaks fondly of Long Island.

In the music room, André tells Simcoe that he’d like to appoint him as the new commander of the Queen's Rangers. Simcoe calls the assignment a demotion but agrees to accept if he may base the Rangers in a place of his choosing.

Abigail furtively scribbles a note and hides it in the hem of a shirt. She later tells André she’d like to send the shirt to her son, Cicero, in Setauket. He offers to deliver it at once.

Abe continues to case the city, noting heavy naval activity at the west wharf. In his notepad, he describes all the artillery and ships.

At the boarding house, Abe encrypts his notes on hard-boiled eggs using invisible ink. He then holds the eggs over a flame. The owner walks in by accident and asks if something is wrong with the eggs. Abe lies and says he likes his eggs warm.

Hewlett pays a late-night visit to Anna at DeJong Tavern to deliver Abigail’s package. He tells Anna that he has asked the Magistrate to grant her a divorce and suggests they establish a platonic friendship. He rambles awkwardly but stops upon realizing that Anna does not share his feelings.

After Hewlett has left, Anna opens the package and finds Abigail’s note: “General Lee a traitor.”

André and Clinton attend a lavish ball at the Shippen house, a party meant to welcome the British to Philadelphia. André flirts with Peggy Shippen, the youngest daughter. As they dance, he inquires about Benedict Arnold, who once stayed at her house. “I wonder what games are we playing now?” she asks.

As Abe checks out of the boarding house, the owner puts bread in Abe’s lunch basket for the trip back home. He remarks that Abe looks very tan for a man who’s been buried in books.

Abe meets Eastin at the checkpoint and realizes that the eggs have disappeared from his lunch basket.

Abe runs back to the boarding house and tells the owner he left something behind. Abe suddenly realizes the owner took his eggs — and yet, curiously, didn’t turn him in. He asks the owner for his name. “Robert Townsend,” the owner replies. “And I don’t care to see you here again.”

In the woods of Pennsylvania, Jordan and the rest of the Queen’s Rangers idle around their camp. Simcoe arrives on horseback and introduces himself as their new commander. Cager, one of the Rangers, mocks Simcoe’s Royal Officer uniform, drawing snickers from the others. Simcoe breaks Cager’s arm and slashes his scalp. When Cager reaches for his gun, Jordan shouts out a warning. Simcoe shoots Cager dead, then orders the men to fall in line. They immediately obey.