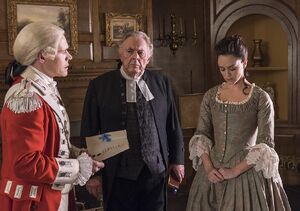 A woman sets the table at her house in the woods. She hears a noise and grabs a rifle.

Outside, the woman finds Ben Tallmadge lying unconscious on the ground. She drags Ben's body into her house, extracts Lt. Gamble's bullet from his abdomen and sews up the wound.

At Penn Mansion, Benedict Arnold anxiously stands over Peggy Shippen's shoulder as she writes a letter to John André, informing him of Arnold's interest in serving England. She describes Arnold as an "exceptional character," the words chosen by André to signal Arnold's interest.

André reads Peggy's letter and learns that she and Arnold will be married on March 1. A disconsolate André unlocks his cabinet and retrieves a book with a secret compartment.

André asks Abigail to deliver the book as well as a personal letter to Peggy.

At Whitehall, Anna Strong asks Major Hewlett if they may visit New York after their impending wedding - hoping to steer him away from Setauket and save him from Abe Woodhull. Their conversation is interrupted by the arrival of Abe and Thomas.

In the study, Hewlett alerts Abe that Selah Strong asked Anna to admit to adultery with Abe in his divorce request. Skeptical that Selah would make such a request, Abe thanks Hewlett for telling him.

Ben wakes up to find the woman who had tended to his wound sitting by his bed with a rifle. Ben tells her he is a traveling minister who was attacked by thieves on the road. The woman lowers her gun and introduces herself as Sarah Livingston.

In the woods, Lt. Gamble enlists two locals to help look for Ben.

Abe stops by Richard Woodhull's bedroom and asks for a favor.

Sarah offers Ben some food and informs him that her husband was shot by thieves one year ago.

André drinks in his parlor and wallows in memories of Peggy.

André goes to Rivington's Corner with his sketchbook. Philomena Cheer joins him at his table and attributes his morose mood to a love interest. She tries to cheer him up by propositioning him. André orders a drink from Robert Townsend and remarks on having a weakness for women.

Anna visits Abe at his cabin to make one more plea for Hewlett's life, but Abe refuses. Abe forbids Anna from marrying Hewlett and reveals that he told Richard that she forged a divorce request from Selah. Anna accuses him of jealousy and storms out.

Sarah checks Ben's temperature in bed. He takes her hand and they make love.

Philomena lies in bed with André after making love. He gives her a sketch of Peggy and asks her to style her hair the same way.

In his bedroom, Arnold reads a letter from André and complains that he's being treated like a "common spy" instead of a military leader. Peggy tells Arnold that his country betrayed him and exhorts him to take charge and tell André what his demands are. She also suggests he offer some intelligence as a sign of good faith. Arnold mentions the devaluation of the Continental dollar that Washington had revealed to him in confidence. "Perfect," she says.

Ben tries to kiss Sarah in bed but she brings up his vows as a minister. He reveals that he is a Continental officer and urges her to come with him. She calls him a traitor, revealing that it was Rebels who killed her husband after he refused to sell them crops. Ben denies the accusation then realizes that Washington had in fact ordered his men to obtain supplies "at all costs" the previous winter.

Ben and Sarah hear Lt. Gamble's horses outside. Ben hides. As Gamble searches the house, Sarah tells him she has not seen anyone. The locals tell Gamble that Rebels killed Sarah's husband and stole her crop. A sympathetic Gamble leaves Sarah alone. After Gamble is gone, Sarah orders Ben to leave.

At Whitehall, Anna and Hewlett begin their wedding ceremony. Richard interrupts the ceremony to declare that Anna forged the divorce papers. She admits it is true but accuses Hewlett of making her do it. A stunned Hewlett looks into Anna's eyes then tells Richard that he did force the forgery.

Peggy gives Abigail a book of Shakespeare's sonnets to bring to André. Abigail assures Peggy that André thinks about her every day.

At the salon, Philomena gives the sketch of Peggy to her stylist, Freddie, asking him to mimic the hairstyle. Freddie, who was once Peggy's coiffeur and confidante, recognizes Peggy's face instantly.

A defeated Hewlett informs Wakefield that he is resigning from his post and going back to England.

Anna signals Caleb Brewster with the laundry and meets him on the shores of Long Island Sound. He rows her away on a boat.

Abe reads a letter that Anna left on his doorstep, in which she explains that she has no reason to stay in Setauket. She writes that she may never forgive Abe for forcing her to befriend Hewlett and then making her pay for it. Abe runs to shore to stop Anna but he is too late.