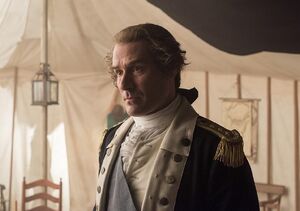 John André visits a prisoner, Henry Dawkins, at a New York sugar house and offers to release Dawkins if he helps with an illicit task.

André and Dawkins enter Rivington's Corner with a group of men hauling large sacks of paper. They file into James Rivington's press room.

Rivington confides to Robert Townsend that the Royal Army is planning to flood rebel states with counterfeit money printed on his presses, thus devaluing the Continental dollar. Townsend purchases an ad to signal Abe Woodhull.

At Woodhull Farm, Abe gives pointers to Mary Woodhull as she practices shooting a musket. A carriage approaches with a delivery of goods for the house.

After the carriage departs, Abe sees Townsend's ad in Rivington's Gazette and leaves to meet Samuel Townsend in Oyster Bay.

In Washington's tent, Washington thanks Anna for all her sacrifices. Anna tears up and offers to keep serving the ring. Washington nods awkwardly.

Outside, Anna rants to Ben and Caleb about being treated like a mere "camp follower." Ben reminds her that women are not allowed to serve in official capacity.

Dawkins demands a drink from Townsend at the bar. Townsend offers to bring everyone free madeira.

Townsend serves madeira to André's men and overhears André inform 12 "shovers" that a ship will transport them to Conn Hook, where they will disperse with the counterfeit bills. He introduces Lt. Gamble, who is overseeing the operation.

Ben visits Anna in her new tent, which previously belonged to Nathaniel Sackett, and insists that working for the ring is too dangerous. At Anna's prodding, Ben admits he told Washington that she left Setauket amid rumors of adultery with Abe. He storms out after Anna accuses him of underestimating women.

Samuel looks for his son Robert Townsend at Rivington's Corner. Rivington informs him that Townsend is resting.

In his room, Townsend writes an invisible message on a page of sheet music. He opens the door for Samuel and Rivington, who proceeds to snoop around. After Rivington leaves, Townsend hands the sheet music to Samuel. Samuel invites Townsend to Thanksgiving dinner the following week.

Captain Simcoe and his Rangers return from Rocky Point and pass by Woodhull Farm. Knowing that Robert Rogers is on the loose, Simcoe warns Mary to stay in her house.

Mary rushes to Whitehall and implores Richard Woodhull not to report Abe as a spy to Simcoe. Richard agrees on the condition that she give him custody of Thomas. She refuses. When Simcoe shows up at Whitehall, however, she reluctantly hands Thomas to Richard to prevent Richard from talking.

Simcoe informs Richard that Rogers colluded against him with Hewlett. He declares Whitehall his new headquarters and claims Hewlett's old room.

Abe meets Samuel in Oyster Bay and assures Samuel that he will never again send Rogers in his place. Samuel gives Abe the sheet music and invites Abe to Thanksgiving dinner.

Richard writes a letter in his library but hides the letter behind a seat cushion when he hears Simcoe arrive. Simcoe claims the library as his new office.

Abe races to the dead drop and deposits his report, which also contains Townsend's observation that André is suffering from woman troubles. Meanwhile, the shovers have already arrived in Conn Hook.

Back at Woodhull Farm, Mary tells Abe what happened at Whitehall. Abe strides to the root cellar to get his pistol and kill Simcoe. Mary begs Abe to think before acting. Rogers emerges from the shadows and demands to know what was in Townsend's latest message. When Abe tells him about André's heartbreak, Rogers leaves for New York to ask Townsend for the name of André's lover. When Abe tries to stop him, he locks Abe and Mary in the cellar.

Anna finds a map of Setauket in her tent. She cries.

Washington meets with Ben and Caleb to discuss Townsend's report. Washington laments that they received the message too late.

In the camp, Ben asks Caleb for ideas on how to stop the shovers. Caleb looks toward Anna's tent.

Ben and Caleb brief Anna. She speculates that the shovers may offload their counterfeit bills all at once by purchasing products in bulk from privateers. Caleb recalls that privateers at Moodna Creek were planning to pull their tobacco off the market in anticipation of a large sale. They deduce that the privateers must have lined up a buyer: the Royal Army.

At Moodna Creek, a shover haggles with Captain Sobel, a tobacco privateer. Ben and Caleb sneak up with a team of Native Americans. Caleb sees Gamble and, eager to avenge Nathaniel Sackett, aims his gun. Ben stops him, figuring Gamble will know the location of the other shovers.

Ben and Caleb ambush Gamble's men. Ben tackles Gamble and asks where the other shovers are. Gamble fights back. Ben stabs him in defense. As Gamble dies, Caleb shoots him point blank.

In the root cellar, Mary chastises Abe for keeping her in the dark about Rogers and the Simcoe ambush. He promises to tell her everything going forward but insists she help get them out of the cellar so that he can stop Rogers.

Richard sneaks into his library late at night to retrieve the letter but is unable to find it. He sees Simcoe playing with Thomas in the parlor. Simcoe produces the letter, in which Richard writes to Colonel Cooke seeking protection from the "brutal and now unchecked" Simcoe. Simcoe threatens Richard but is interrupted when Abe and Mary race through the door and claim they were robbed by Rogers. Simcoe asks which way Rogers ran.