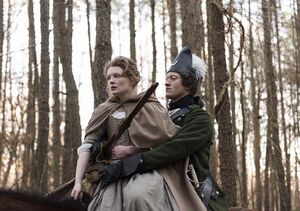 Mary tries to kill Simcoe on her own. Benedict Arnold defends himself in his own court-martial. Ben reunites with the woman who saved his life.

Captain Simcoe and the Queen's Rangers ride for Setauket.

At Woodhull Farm, Abe and Mary Woodhull pack their trunk. They discuss plans to get their son, Thomas, from Whitehall then meet Caleb Brewster at the cove and flee Setauket. They hear Simcoe outside and hide the trunk.

Simcoe enters the cabin and returns Abe's pistol, which Robert Rogers left at Samuel Townsend's house. Simcoe aims his gun at Abe and demands the truth. Abe blurts out that Rogers is Samuel Culper and that he threatened to kill Thomas if Abe didn't help him spy.

Abe brings Simcoe to the spy cave to prove that Roberts is a spy. Believing Abe, Simcoe tells his men to guard Abe's farm and orders Abe to stay while Simcoe will lead Mary to Whitehall. After Simcoe leaves, Abe tells Mary to get Thomas and meet Caleb at the cove.

At Penn Mansion, Benedict Arnold assures Peggy Shippen that he will receive his back pay once the court-martial is settled and be able to offer her a more lavish lifestyle. Peggy advises him to restrain his anger at the trial.

At home, John André gazes at Philomena Cheer's new hairstyle that is just like Peggy's. They kiss.

Abigail walks in to find André and Philomena having sex in the parlor. She informs André that the checkpoint required a signature for the letter that she was to deliver to Peggy. André tells Abigail that his relationship with Philomena is merely work-related and asks her not to tell Peggy.

Simcoe and his men accompany Mary to Whitehall. In the woods, Mary screams and insists she saw Rogers. Simcoe dispatches three Rangers to investigate.

Meanwhile, Caleb arrives at the cove and waits for Abe and Mary.

In General George Washington's camp, Anna Strong urges Ben Tallmadge to tell Washington that the Ring has dissolved. Ben insists on waiting until Abe arrives with a full report. Lt. Randall informs Ben that a gang of Tories has been captured.

Lt. Randall takes Ben to the barn where prisoners are being held. He says the Tories ambushed a patrol then made a stand at a nearby farmhouse. Ben sees Sarah Livingston among the prisoners.

A Ranger spots Caleb by the cove and mistakes him for Rogers. The Rangers open fire on Caleb. He flees.

Sarah tells Ben that she helped plan the ambush. She asks him to help get her out of prison since she helped conceal him from Lt. Gamble.

At Whitehall, a Ranger informs Simcoe that they spotted Rogers. Guessing that Rogers has come for him, Simcoe stays at Whitehall and orders some men to guard the perimeter.

At Dickerson's Tavern, Arnold's court-martial unfolds before a tribunal. Arnold quietly seethes as Joseph Reed questions a witness. Arnold cross-examines the witness and discredits his testimony.

Richard Woodhull tells Mary that Simcoe threatened Thomas and urges her to flee with Thomas. Mary refuses to leave and risk exposing Abe.

Ben hands Sarah a letter that authorizes her release if she agrees to spy for the Patriots. He urges her to sign the letter even if she has no intention of spying. She refuses, saying the letter would brand her a traitor after the war was over.

André arrives home to find Philomena singing in his parlor. Annoyed at the intrusion, he tells her their relationship is over.

Peggy reads André's letter and tells Abigail that André overestimates her ability to regain Arnold's interest. She confronts Abigail about Philomena. Abigail insists that André loves her, not Philomena, but Peggy remains distraught.

Arnold defends himself against a final charge. The tribunal acquits him of two charges and issues a reprimand for the remaining charges.

Caleb heads toward Abe's cabin but spots Simcoe's men on the perimeter. He opens fire on them, then runs for the cabin. Inside, Abe and Caleb deduce that Mary must have given up Caleb's location to Simcoe.

The terrified Rangers run to Abe's cabin for safety.

Abe asks Caleb to check on Mary at Whitehall. Caleb leaves. Moments later, the Rangers barge in and take refuge.

Lt. Randall sexually assaults Sarah in the barn. She tries to grab his gun. As they struggle, his gun goes off.

Ben runs to the barn and finds Sarah dead. Quickly guessing what happened, he pummels Lt. Randall in the face.

At Whitehall, Mary cooks dinner for Simcoe then announces that she is going upstairs for a bath. She quietly grabs a rifle, sneaks outside and lines up Simcoe in her sights through the window. She fires and Simcoe falls to the floor inside. She encounters a Ranger and stabs him dead. Caleb watches Mary from the perimeter.

Simcoe's ear lies on the table. Simcoe stands up, clutching his wound. "Where is he?!" he screams from the front door.

Mary puts the rifle back in its place. Meanwhile, Simcoe orders his Rangers to fall back to the house. "She's got them running around in circles," Caleb says as he watches from the woods.

In the bathroom, Mary scrubs blood from her body. Downstairs, Simcoe sees the rifle. He marches into the bathroom and finds Mary in the bath. He apologizes but notes that she hasn't inquired about his wound. They hear a gunshot. Simcoe leaves.

Outside, Caleb fires his gun. "You want Rogers? I'll give you Rogers," he says. Rangers pursue him.

Arnold visits General Knox to request his back pay, now that he has been exonerated. Knox tells him that Congress is bankrupt and that everyone is serving without pay.

A despondent Arnold returns to Penn Mansion. Peggy tells him that she wants to get married immediately. Arnold asks for a moment alone. He tosses a copy of the court decision in the fire.