Many Mickles Make a Muckle

View source
watch 01:25
Jurassic World: Dominion Dominates Fandom Wikis - The Loop
Do you like this video?
Play Sound
Many Mickles Make a Muckle 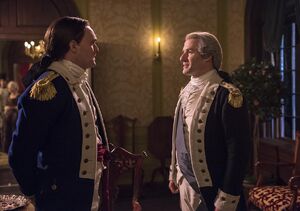 Three months ago in Oyster Bay: Robert Townsend nurses Samuel Townsend's wounds following the Queen's Rangers' attack on their home. Townsend decides to join the Culper Ring as a way of fighting back. In a flashback, Samuel glimpses the face of a "Ranger" who torched his home: it's Caleb Brewster.

With Abe Woodhull as a guide, Captain Simcoe and his Rangers scour the woods in search of Robert Rogers.

A Ranger glimpses Rogers and pursues him. Rogers kills the Ranger with an axe.

In camp, General Washington and Ben Tallmadge examine the counterfeit bills that they recovered in the Moodna Creek raid. Unable to discern any difference from legitimate bills, Washington decides to visit Philadelphia to convince Congress to recall all bills. He also decides to reduce the delivery time of Townsend's reports by eliminating the Setauket run and cutting Abe out of the Ring.

Simcoe finds the dead Ranger and vows to search every home until they find "our notorious Mr. Culper." Abe quietly registers Simcoe's words.

Ben asks Caleb to collect Townsend's reports directly from Samuel. Caleb says he cannot be Samuel's courier because Samuel saw his face when he torched Samuel's barn on orders from Abe, who was trying to persuade Townsend to join the Ring. Anna Strong volunteers to collect the reports from Samuel.

At Penn Mansion, Benedict Arnold seethes over a letter from John André, in which André asks for more details about Washington's camp. Arnold writes a letter to André demanding compensation.

In his library, André reads Arnold's demands to General Henry Clinton. Clinton refuses to pay Arnold until Arnold gives them more information, such as the identity of Culper.

Arnold angrily reads André's response and fumes to Peggy Shippen that he doesn't even know anything about intelligence, since it's overseen by Ben. Arnold decides to forgo André and throw a party for Washington so that he can ask Washington to overrule the postponement of his court martial.

Abe visits Samuel to warn him that Rangers are coming and urges Samuel to stay with Townsend in New York.

Caleb and Anna arrive at Samuel's home. Caleb hides outside while Anna knocks on the door.

Abe hides as Samuel answers the door, but emerges when he hears Anna's voice. Anna informs Abe that he's been cut from the Ring. She tells Samuel that she will be his new contact.

Rogers sneaks up on Samuel's house.

Arnold and Peggy welcome Washington, Ben and Billy to the ball. Arnold asks to speak privately with Washington at a later point.

Washington strides up to the older woman in Betsy's circle. To Betsy and Becky's surprise, their companion is Martha Washington.

Ben marvels at Arnold's mansion. Peggy tries to catch the eye of an evasive Becky.

Peggy introduces herself to Ben. She sidles close and requests a dance.

In private, Arnold begs Washington to move up the date of his court martial so that he can quickly settle the accusations against him.

Rogers sneaks into Samuel's house and takes Anna hostage at gunpoint. Caleb follows Rogers inside and orders him to drop his gun. Abe tells Caleb that he knows Rogers and implores everyone to leave before the Rangers arrive. Rogers refuses to leave until he talks to Townsend.

Simcoe and his Rangers raid a Tory home in search of Rogers. Predicting that Rogers would prefer traveling through towns with unarmed residents, Simcoe rides for the Quaker town of Oyster Bay, since Quakers don't carry guns.

At the ball, Joseph Reed threatens to deny Washington's recall request if Washington helps Arnold. As Washington mulls over his dilemma, Martha playfully accuses him of not wanting to be disliked by anyone.

Ben praises Arnold on the lavish ball. Arnold interprets Ben's compliment as an indictment of his extravagant expenses.

Peggy corners Becky at the ball. Becky tearfully hands her a letter from Freddy, their friend in New York, about André. Upon reading it, Peggy grows distressed and asks who Philomena is.

Caleb tries to leave but Abe refuses to abandon Townsend.

Simcoe leaves Samuel's house and, rather than pursue Rogers, sets course for Setauket.

Abe tries to go back to Townsend but Caleb tells him he'll just make things worse.

Washington informs Arnold that he will ask Congress to speed up the court martial process. Arnold thanks him profusely.

Abe, Caleb and Anna sail for Setauket. Abe laments the end of his role in the Ring. Anna assures him that no one could have done what he did.

At the ball, Washington dances with Peggy while Martha dances with Arnold. A flicker of unease crosses Ben's face as he watches everyone.