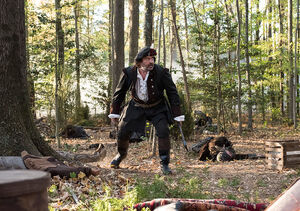 Abe tries to recruit a new agent. Caleb and Rogers race to hunt down intelligence from London. André's history is exposed.

Ben surprises Abe at the Setauket dead drop and tells him to go get Anna. In Abe’s root cellar-turned-spy cave, Ben shows Abe and Anna how to use invisible ink, and presents Sackett’s wooden toy boat, which has a secret compartment containing instructions for Abigail on how to compose intelligence reports. Abe tells Ben that he is working to recruit boarding house owner Robert Townsend to be their agent in the city.

At Whitehall, Anna asks Hewlett to send Sackett's toy boat, a “gift from Cicero,” to Abigail in Philadelphia. Hewlett agrees, then invites Anna to return the following night to find out what’s inside a large crate that just arrived.

In New York City, Abe makes his way to Townsend’s boarding house and notices a man following him. Abe gives the man the slip and enters the boarding house, where Townsend tells Abe he’s fully booked. Abe refuses to leave and tells Townsend he’s there to talk to him.

At a privateer hideout on the Connecticut coast, Caleb tracks down Captain Ryder, whose crew ransacked the ship carrying the wax bust of King George III sent from London by Patience Wright. Ryder quickly discerns Caleb wants the bust and demands to know why.

In his Morristown medical tent, Benedict Arnold offers Ben a job as his aide-de-camp. Bemoaning his inability to fight, Arnold asks Ben to help protect Washington.

In Philadelphia, Major André updates General Clinton on the next step in his plan to turn Arnold: Send General Lee the text of a rumor to spread through the Continental Army camp purporting that Arnold is a snake who would choose money over country. André receives an invitation to tea from Peggy’s father, Judge Edward Shippen.

At the privateer hideout, Caleb warns Ryder that Robert Rogers is hunting for the bust, and offers to take it off Ryder’s hands. Before they can strike a deal, Rogers and a band of mercenaries attack the hideout. Caleb shatters the bust, grabs the intelligence inside, and escapes.

At his mansion, Judge Shippen, flanked by his lawyer, banker, and secretary, greets André. The judge begins asking questions about André’s pedigree, noting André must be deemed a suitable match if he’s to marry Peggy. André responds that he hasn’t proposed and makes an excuse to leave, stopping on the way out to angrily provide the details of his lineage. Peggy runs after him and apologizes, insisting she merely told her father she was “impressed” by him. “I don’t like being ambushed,” André responds, and storms out of the house.

At the boarding house, Townsend challenges Abe to a game of draughts. As they play, Abe brings up Townsend’s Whig roots, and slyly invites Townsend to spy for the rebels. Townsend becomes adversarial and calls Abe a “boy playing a man playing a spy.” Abe gets up to leave. “I used to be just like you, and it sickens me now,” he whispers sharply on his way out. To his surprise, Townsend invites him to return.

Outside, Abe again spots the man who’s been following him and chases him into an alley. Suddenly, a gang of thieves attacks them both in a robbery attempt, and the man is fatally stabbed. As he dies, the man reveals his name is Henry Browning, and he was hired by Richard to follow Abe.

In a public garden, Peggy tracks down André and again apologizes for her father’s behavior, explaining that she has never spoken highly of any suitor before she met André, hence her father’s protective behavior and assumption they wanted to marry. André rebukes her, then kisses her passionately.

That night, at Whitehall, Anna finds Hewlett outside, viewing the nighttime sky through a new telescope. Hewlett offers her a peek, and confesses that studying the stars was his calling before family financial troubles forced him to join the army. He asks Anna to call him Edmund when they are alone together.

On the Connecticut coast, Simcoe sneaks into a Continental outpost and slits a captain’s neck. He then cuts out the captain’s tongue and attaches it with a knife to a note he scrawls in the captain’s blood: “Compliments of Major Hewlett DEATH TO ALL REBELS.”

In the Morristown medical tent, Arnold excitedly shows Ben a letter from Peggy, noting she is “very rich.” Arnold’s mood turns dark when Ben reports that Generals Lee and Gates are now disparaging Arnold by saying he has no honor and would choose money over country. Arnold is taken aback when Ben reveals the disparaging comments were made in front of Washington, and Washington said nothing. Ben asks if he can be Arnold’s aide-de-camp while still remaining Washington’s head of intelligence. “You are a man of blood, not some desk-bound clerk,” Arnold scoffs, and he tells Ben he must give up spying if he wants to serve with him.

Upon his return to Whitehall, Abe slams Richard against a wall and demands to know why he was being followed. Abe releases Richard when Hewlett walks in, and Hewlett attempts to clear the air by confessing to Abe that Richard knows about the Sons of Liberty mission. He then proposes that Abe fill them both in on his latest intelligence report. Richard smirks, confident Abe will have nothing to report.

Abe tells Hewlett and Richard that he found a dead drop in New York and tracked down a man by the name of Henry Browning. “Find him, you find the Sons of Liberty,” Abe says, casting a smug glance at Richard.