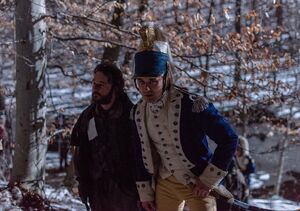 The Culper Ring is resurrected in time to save Washington's army. Simcoe terrorizes Setauket as he hunts for Rogers. Anna infiltrates New York.

At Washington's camp in Middlebrook, N.J., General Washington reads Ben Tallmadge's report on the demise of the Ring. Ben asks to resign as head of intelligence.

In John André's parlor, General Clinton reads a letter from Benedict Arnold requesting 10,000 pounds for his spy services. André strongly advises they take advantage of Arnold's financial desperation and recruit him. Clinton disagrees and, upon further reading of Arnold's letter, gathers that Washington's camp is in Middlebrook.

Washington refuses to accept Ben's resignation and points out that they still have a spy, Abigail, in New York City.

Ben asks Anna Strong to approach Abigail in New York City and suggests she acquire a city entry pass from Major Hewlett. Anna refuses to exploit Hewlett again. "We make sacrifices so that others don't have to," Ben says.

At Rivington's Corner, Hewlett reads a letter from Anna in which she requests a visit with him.

At a nearby table, Clinton drinks with Governor Tryon and Colonel Jonathan Cooke as they celebrate the impending ambush of Washington's camp. James Rivington tells Robert Townsend that big news is afoot but Townsend refuses to hear the news.

That night, Townsend changes his mind and finds the mock-up front page for Saturday's paper: "Washington Trounced in Tryon Triumph. Rebels Massacred at Middlebrook." He immediately rides for Long Island.

Abe Woodhull urinates into a large pile of hay outside his cabin as a Queen's Ranger guards him from a distance. Caleb Brewster quietly emerges from hiding on the other side of the hay stack and tells Abe about Mary Woodhull's plot against Captain Simcoe. Abe tells Caleb to steal John Robeson's boat so that they can escape Setauket.

At Penn Mansion, Peggy Shippen makes wedding plans with her mother, Margaret Francis Shippen, and sister, Betsy Shippen. Arnold arrives with Edward Shippen and informs Peggy he's been offered a command post at West Point. Peggy storms out when she learns they will have to leave Philadelphia.

Simcoe visits Abe at the cabin and asks who he was spying on for Robert Rogers. Abe says it was Robeson.

Simcoe confronts Robeson at DeJong Tavern and demands to know who Rogers asked him to spy on. Robeson denies working with Rogers. Simcoe pushes him onto an iron grate and fatally impales him.

Simcoe strides over to Maarten DeJong, who he assumes Robeson had been spying on, and demands to know what secret Robeson had on DeJong. DeJong denies any knowledge of Rogers.

Simcoe drags DeJong outside and threatens him with an axe. He yells at everyone in the town square and threatens to destroy the town if no one confesses to helping Rogers. Abe sees Townsend and quietly instructs him to ride to Woodhull Farm.

At the farm, Townsend gives Abe the mock-up of Rivington's Gazette. Abe urges Caleb to leave without him so that he can relay the news to Washington as quickly as possible.

At Whitehall, Simcoe asks Richard Woodhull if he knows of any Setauket residents with secrets that Rogers could have used against them. Richard agrees to give him a list of people.

In New York City, Rogers accosts Philomena Cheer in the street and orders her to help him plot against André. She readily agrees.

Anna meets Hewlett at Rivington's Corner and explains that she left him at the altar to protect him from Abe's murder plot. She also admits that she, too, was a spy. "Did you ever love me?" he asks. Anna evades the question. He leaves.

Caleb brings the Gazette to Ben, who brings it straight to Washington. Ben suggests they attack the Stony Point garrison, figuring it will be undermanned while Tryon leads his Tory soldiers to Middlebrook.

Ben prepares his men for a nighttime attack on the garrison. He instructs them to use only bayonets to keep the attack as quiet as possible.

Meanwhile, Tryon rallies his militia men and offers a prize to the man who captures or kills Washington.

Tryon leads his men through the woods and arrives at Middlebrook only to find it empty.

Ben's men attack the garrison and slaughter the Tory militia. The survivors surrender. Ben and Caleb raise the American flag.

At Whitehall, Richard gives Simcoe the list of residents that he promised. After Simcoe leaves, Mary accuses Richard of aiding Simcoe. Richard snaps that she has no right to judge him.

Tryon sulks at Rivington's Corner. Clinton sits with André and regrets sending militia instead of regulars. André says it would have made no difference, since it was clearly a traitor that sabotaged their plan.

In Washington's tent, Ben tells Washington he'd like to interrogate the prisoners to determine how the British discovered their camp's location.

Anna visits Abigail at André's home. After catching up, Abigail divulges that André enlisted a woman in Philadelphia to turn a Continental general. She calls Cicero into the room to reveal the general's identity: Benedict Arnold.