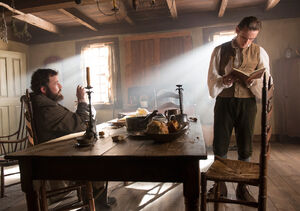 When an old threat returns to Setauket, Abe risks everything to protect Anna. Robert Rogers travels to a prison ship seeking a mysterious man.

Robert Rogers visits the prison ship HMS Jersey and asks for Samuel Tallmadge. After discovering that Samuel died of dysentery, he asks to speak with the prisoner who knew Samuel best. The warden brings him Selah Strong, who Jordan instantly recognizes.

Caleb pays Abe a surprise visit at Woodhull Farm. Caleb notes it's been two months since Abe's last report, and Abe tells him he's had trouble getting into New York because of the restriction on solo travelers entering the city. Caleb gives Abe a codebook to encrypt his intelligence reports, and mentions that Abe now has an alias, "Mr. Culpeper." "I hate it," Abe says, surprised to hear that the alias was picked by General Washington himself.

At the Setauket church, Hewlett and Richard address citizen grievances. Anna seeks parole for Selah and accuses Richard of forcing a confession so he could claim and sell Selah's land. Richard denies Anna's request.

On the HMS Jersey, Selah gobbles down some food and tells Rogers he's known Samuel and Ben his entire life. Rogers asks Selah if he'd like to go home.

Ensign Baker delivers a package to Anna at Strong Tavern, which she's been forced to sell to Maarten DeJong. Anna gives Cicero the package, sent by John André, which contains a birthday hat that Abigail knit.

Abe stops by the tavern, and Anna is taken aback when he tells her he's going to New York to sell her cauliflower crop in New York. He asks if she'll accompany him, posing as his wife, so that he can get through checkpoints.

Cicero gives Anna a note that Abigail hid in the hat: "Simcoe Alive - Returned Setauket this Monday." Abe angrily asks why Simcoe is alive, despite what Caleb told him. Anna admits she covered up Simcoe's escape so that Abe would stay loyal to the cause.

Simcoe steps off the boat in Setauket and heads straight to Strong Tavern. However, Baker flags him down and tells him to report to Hewlett.

At Whitehall, Simcoe tells Hewlett that his captors hailed from Setauket and seeks permission to conduct an inquiry into the Tallmadge and Brewster families. Hewlett agrees, but warns him to "tread lightly." "We must show these people that we are better than the rebels," Hewlett says.

Mary looks for Abe at Woodhull Farm and notices new silverware on the table. Baker reluctantly tells her it was a gift from Anna. When prodded, he admits he saw Anna with Abe on Epiphany. Mary cries.

Outside, Simcoe corners Baker and demands to know what he said to upset Mary.

Abe meets Anna in the tavern cellar and proposes they kill Simcoe in a fake robbery. She dismisses the plan, saying Abe is no killer.

At Whitehall, Mary asks Richard to arrange a pardon for Selah in the hopes that his return will temper feelings between Abe and Anna. She asks if it's true that Abe and Anna were once engaged. Richard reassures her that Anna was just a "childish infatuation" for Abe.

In the woods, Simcoe attacks Abe for "forcing himself" on Anna at Christmas. Baker rescues Abe from a severe beating.

At Washington's headquarters, Ben receives a message that his brother Samuel has been pardoned and is being released from the HMS Jersey. Ben rejoices over the news that Samuel is alive with Caleb, who offers to go pick Samuel up.

Simcoe and Abe are summoned to the church, where Simcoe tells Hewlett he attacked Abe because he thought Abe had assaulted Anna. To Richard's dismay, Baker clarifies that Anna's dalliance with Abe was consensual. Hewlett orders Abe and Simcoe to shake hands, but Abe refuses and storms out.

At the tavern, Simcoe corners Anna, who can barely conceal her agitation. She asks Simcoe to help safeguard her honor, since she is still married. Simcoe misinterprets her request and says come dawn, she'll no longer need to fear advances from "inebriated farmers."

Anna races to Woodhull Farm to warn Abe of Simcoe's threat. Unable to find him, she learns from a field hand that Abe had been shooting a scarecrow with a pistol.

Anna wakes Richard at Whitehall. He tells her Selah will be pardoned as long as he doesn't challenge the attainder, but Anna explains she's there for a different reason: Abe is in danger.

At dawn, Abe meets Simcoe by the mill pond. Baker reads the duel conditions and flips a coin to determine who will shoot first. Abe wins the toss. As they stand back-to-back in preparation to walk off five paces, Simcoe whispers to Abe, "She's mine."

Abe shoots and misses. As Simcoe aims his pistol at Abe, Richard and Anna arrive at the scene. Anna pleads and convinces Simcoe to misfire. However, Abe reloads his pistol and aims at Simcoe. "This is about more than you!" Richard pleads. Abe pictures Thomas, Caleb and Ben, then looks at Anna. He lowers his gun and stalks off.

Jordan accompanies Rogers through a field on their way to ambush Ben, who they presume will be coming to collect his brother. Meanwhile, Caleb rides his horse through the woods on the belief that he is collecting Samuel.

The next day, Abe and Anna set off for New York to pick up Selah and sell the cauliflower. Anna curtly tells Abe he should have killed Simcoe when he had the chance.

Mary watches Abe and Anna leave together in the wagon. A friend reassures Mary that the trip is purely business.