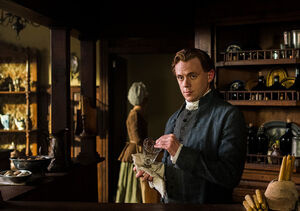 Amidst a growing rebellion in camp, the Culper Ring must chart a new course. Arnold finds an unlikely ally. Rivington teaches Townsend a lesson.

In a dream, Abe Woodhull scribbles furiously in a ledger at Richard Woodhull’s desk in Whitehall. Abe turns and looks at a smoking gun on the floor. Mary Woodhull walks in and picks the gun off the floor and walks out. Abe continues writing in the ledger and ink suddenly spills across the paper. Richard Woodhull walks in and demands Abe shows him the ledger. When he sees the ink has ruined it, he throws Abe to the floor and kicks him.

Abe wakes up in a barn at the New Windsor camp. Anna Strong informs him that Ben Tallmadge brought him and Caleb Brewster to camp the previous night. She comforts him as he stares at Richard’s dead body.

A medic stitches up Caleb’s wounds. Caleb sneaks out of the medical tent and rides off on a horse.

Abe insists that Ben give him transportation to bring Richard back to Setauket for burial. Ben agrees but tells him to wait until nightfall so that no one sees him. Abe tells Ben that he no longer wants to spy for the ring.

Ben tells General Washington that Abe wants to quit the ring. Washington orders Ben to change Abe’s mind. Ben says a meeting with Washington would help persuade Abe, but Washington refuses to risk exposure. Washington demands an update on the hunt for Benedict Arnold. Ben informs him that they have no intelligence on Arnold’s movements in the city and that they can’t use Culper Jr., as he has been silent for weeks.

General Clinton admonishes Arnold for the massacre in Connecticut which resulted in Richard’s death, and blames him for delegating the hostage exchange to privateers. Arnold argues that he was forced to use privateers because he does not have a proper regiment. He urges Clinton to grant him the regiment he was promised, and “unleash” him on Washington.

At Rivington’s Corner, Arnold purchases an ad to seek out soldiers for his new regiment, the Loyal American Legion. Rivington asks for a comment on the massacre. Arnold writes it off as a scuffle between Tory and Patriot privateers but Rivington tries to embellish the story by asking if the attackers were rebels in disguise. Townsend expresses disapproval over Rivington’s sensationalized editorializing.

A group of Continental soldiers discover Caleb riding through the woods. He falls to the ground unconscious.

Caleb wakes up back in camp and hallucinates Simcoe’s face when Ben comes to visit him. Ben admonishes him for riding in his poor condition. Caleb tells Ben that they need to discuss an important matter in a more discrete location.

In the barn, Abe and Anna salt and wrap Richard’s body for preservation. Abe explains that Akinbode saved his life at the massacre. Anna says Abigail came to York City to look for Akinbode but that she is no longer serving the ring. Ben and Caleb join them and inform Abe that Simcoe knows he is Culper. Caleb also says Simcoe was responsible for the massacre.

A group of disgruntled Continental soldiers meet in secret to plan a march against Congress in Philadelphia to demand their earned wages. They leave camp and kill a sentinel who tries to stop them.

At the barn, Caleb worries that he may have given up Townsend or Mary to Simcoe when he blacked out. He insists on bringing Mary to camp to keep her safe. Abe realizes that Simcoe planned the massacre out of pure vengeance and vows to kill Simcoe with his own hands. A soldier knocks on the barn door to alert Ben to the mutiny.

In General Clinton’s home, General Clinton meets with Simcoe and Major Dondas and informs them that they will be assisting Arnold’s new regiment. He also grants them authorization to take command of the regiment in the event of Arnold’s death or “incapacity,” leaving the definition of incapacity up to them.

In Rivington’s basement, Townsend tells Rivington he doesn’t want to be treated as a subordinate when he’s a partner in the business; Rivington apologizes. Townsend glances at Rivington’s massacre story on the printing press and admonishes Rivington for sensationalizing the story, which attributes the massacre to rebels. Rivington reveals that he used to report the news objectively until he was attacked by the Sons of Liberty for failing to indict the crown. He maintains that the Continentals are equally as zealous and intolerant as the British.

General Anthony Wayne leads a detachment of Continental soldiers to stop the mutineers. “We are not Arnolds,” the mutineers chant. Wayne dispatches a rider to speak with the mutineers.

At Whitehall, Mary reads about the massacre in the Gazette and cries.

In the New Windsor barn, Caleb tells Abe that Washington is running a mission to capture Arnold in York City. Abe says he has a proposal for the General.

Simcoe meets with Arnold at Rivington’s Corner. Simcoe says the other generals hate Arnold’s tenacity, but that he finds it purer than their politics and avarice. Simcoe pledges to help Arnold’s regiment.

General Wayne informs Washington that he negotiated successfully with the mutineers and that most of them will be discharged. He suggests they punish the 10 officers who led the mutiny by hanging.

The mutiny leaders are tied to posts and blindfolded. As the camp watches, General Wayne orders a group of the mutinous soldiers to be the ones to fire. General Wayne forces the soldiers to stand within only a few feet of the officers and shoot them point blank. The soldiers vomit after the execution.

Ben storms into his tent and complains to Caleb that the defection is tearing the army apart. Caleb informs Ben that Abe wants to discuss the Arnold mission.

In the barn, Abe tells Ben that he can provide intelligence on Arnold’s movements in the city.

Ben meets with Washington and proposes that Abe enlist in Arnold’s unit as a way to track his movements. He cites Rivington’s sensationalized article in the Royal Gazette that rampaging rebels killed his father and says his desire for revenge against these “rebels” is the perfect motivation to join Arnold’s new unit. He reveals to Washington that Abe’s real motive is to kill Simcoe, whose knowledge of the ring threatens everyone as long as he’s alive.

Ben tells Abe that Washington approved the mission but that Abe must wait until Arnold has been captured before killing Simcoe. He instructs Abe to tell Townsend of their mission and then await further instruction from a rebel messenger, who will use the phrase, “I miss the summer of ’73.”

Abe attends Richard’s funeral with a large group from Setauket.

In the woods, Caleb tries practicing with his throwing axe. He misses every time.

Afterwards, Abe tells Mary that Caleb is waiting to take her and Thomas to New Windsor camp. He assures her that he’s merely enlisting in the Regiment in order to kill Simcoe. “Don’t miss,” she tells him.