Of Cabbages and Kings

View source
Of Cabbages and Kings 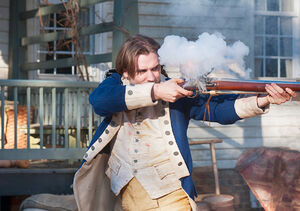 On the run from the British, Ben is betrayed by his own militia. Abe travels with Richard to New York to spy. Mary confronts Anna.

In northern New Jersey, Ben, Caleb and General Scott lead a military convoy on a ride to Fort Lee. A bound Simcoe rides in a cart, guarded by militiamen. The procession encounters a stream of Continental refugees and learn that Fort Lee has been taken by the British and that General Washington may have been captured.

At Woodhull Farm, Richard shows Abe the route they will take together for a business trip: Setauket to New York Island, via Oyster Bay and the Brookland Ferry.

A patriot-leaning farmer agrees to billet General Scott and his men for the night. Ben again pitches the need for spies in New York, but Scott rejects his proposal for a rogue operation.

Ben quietly pulls Caleb aside and orders him to visit Abe in Setauket and gather new intelligence.

At a British checkpoint in Oyster Bay, Richard informs a British regular that he and Abe are on their way to New York on a selling trip to provide pork to British soldiers. While their buyers' bona fide documents are verified, Richard warms up to Abe and suggests he resume his law studies. Abe shoots down the idea and reassures Richard he can provide for his family.

Caleb tells the militiamen guarding Simcoe -- brothers Quill, Eben and Newt Bascombe -- that he's riding ahead to scout. After he leaves, Eben suggests Caleb is deserting and worries that they're fighting for the losing side.

As they arrive at the York Island docks, Richard reminds Abe that the Royal Army now controls the city. He pins a red ribbon cockade to Abe's lapel and says it will instantly indicate their allegiance to the Loyalists. After stepping off the boat, Richard and Abe are immediately propositioned by a pair of prostitutes. Colonel Cooke, Richard's contact in the British Commissary Department, hails them, and Richard introduces Abe as his son and new business representative.

A nervous whaleboat sailor drops Caleb off in a secluded cove on the Long Island shoreline. Caleb tells him to stay put until he returns.

At Strong Manor, Anna sees a black petticoat hanging from the clothesline along with a few pieces of straw from her barn. When she goes to the barn expecting to find Abe, Caleb surprises her instead. Caleb is chagrined to learn Abe is away in New York. Anna offers to collect intelligence, but Caleb declines, saying it's "men's work." In a huff, Anna asks what happened to Simcoe, and Caleb admits he and Ben let him live. Upset by the news, Anna kicks him out of the barn.

In New York, Richard and Abe dine with Colonel Cooke in the mansion Cooke has appropriated from rebel sympathizers. After Cooke rejects Richard's asking price for pigs, Abe proposes a scheme by which Cooke would profit from reselling the pigs to a quartermaster. Cooke agrees and accepts Richard's price. He then asks Richard about the cauliflower that Richard acquired from "some rebel's field." Abe glares at Richard, realizing the rebel fields Cooke refers to belong to Anna.

Caleb returns to the shoreline. The boat is gone.

In the patriot home, Ben, General Scott, and Simcoe dine with the farmer and his wife. Quill rushes in and reports that Tory militia are coming. Ben and Scott run outside and are ambushed by the mutinous Eben and Quill. Eben says he's turning them over to the British in exchange for pardons and money, and a shootout ensues. Ben and Scott run for cover inside the house.

At Woodhull Farm, Mary is upset to learn from Ensign Baker that Abe has been frequenting Strong Tavern since Selah's arrest.

Back in the barn, Caleb asks Anna to check the wharf for unattended boats he can steal. As they chat, Caleb worries that Abe will abandon the cause once he learns that Simcoe is still alive.

At the farmer's house, Ben and General Scott hide in the entryway. Ben tries to sway Newt, the youngest militiaman, by saying the British will destroy their town unless they are stopped. Quill shoots at the house to shut Ben up.

At Colonel Cooke's mansion, Abe attacks Richard for claiming Selah Strong's cauliflower crop and trying to sell it. Richard orders Abe to take responsibility for his family. Abe points out that he honored Richard's responsibilities when he wed Mary, then storms out.

Outside, Abe casts his red ribbon cockade to the ground and walks aimlessly until he finds himself at King's College, his law school alma mater, which is now being used as a military hospital. As he stares at a British flag on a flagpole, Abe flashes back to a daytime scene that includes the sounds of shouting, marching feet, and musket fire, envisioning a pool of blood gathering at his feet.

Nearby, a group of Hessian soldiers is making some sauerkraut. Abe stops to chat with them and learns that the British troops are preparing to stand down for winter. On the pretense of wanting to deliver them some cabbage, Abe also learns that a brigade of 1,500 Hessians will be marching to Trenton.

In Setauket, Anna scans the wharf for a boat for Caleb. Mary pulls Anna aside and confronts her about Abe, telling her she can continue sleeping with him as long as they are discreet. Anna denies they are having an affair, then tells Mary that Abe broke off their engagement so he could wed her, an idea hatched by Richard after Mary's original fiancé -- Abe's brother, Thomas-- died.

At the farmer's house, Ben and General Scott announce their surrender, exiting the house with their hands up. Ben then whips out his gun and shoots Quill dead. They recapture Simcoe after the "surrender."

That night, Anna meets Caleb in her barn and tells him there are three British sentries posted at the docks. To their surprise, Abe shows up and shares the intelligence he gathered from the Hessians. "It's gold!" Caleb exclaims. Caleb starts to tell Abe about Simcoe, but Anna interrupts him and tells Abe that Simcoe is dead.

Later that night, Caleb swims to a boat moored at the dock and hides under a tarp.

At the farmer's house, General Scott informs Ben that he's received word that Washington is safe. He executes Eben and orders Ben to shoot Newt or he will face a court martial. Ben refuses and says he'll face the court martial, insisting Newt was strong-armed by his older brothers. Scott shoots Newt dead.

Anna distracts the dock sentries with free ale while two British sailors unwittingly row Caleb out into the Sound. Caleb leaps out with his gun, forces the sailors overboard, and escapes.

Back on shore, Anna and Abe see that their escape plan for Caleb worked. They exchange knowing smiles.