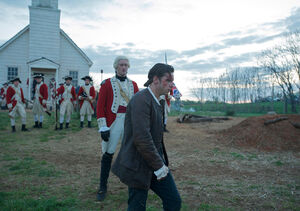 At the dawn of the Revolutionary War, struggling Long Island farmer Abraham Woodhull is recruited by the Colonial Army to spy on the British.

It's the autumn of 1776 in Setauket, Long Island. At his farmhouse, Abe Woodhull speculates to his wife, Mary, that the war will be over by Christmas.

In the aftermath of a battle in New Jersey, a Queen's Ranger stabs fallen Continental soldiers to ensure they're dead. Among the fallen, Ben Tallmadge plays possum. When the Ranger gets to Ben, Ben kills the Ranger, takes the Ranger's bonnet and coat, and begins to walk away. Robert Rogers sees Ben escaping and shoots at him but Ben flees, getting shot in the process.

In the kitchen of a colonial house, Ben meets with his superior, General Charles Scott, and insists that his men were ambushed because the enemy knew they were coming. Ben requests permission to hire a spy but General Scott denies his request.

Abe tills his cabbage field and discovers maggots destroying his crop. He visits Strong Tavern to pay off part of his debt to Selah Strong, the bar's owner. Anna, Selah's wife, enters and is pleased to see Abe. She invites Abe and his family to dinner but Abe declines, saying he'd be shamed for her to cook for his family while in arrears.

John Robeson, a Tory oyster farmer, happily reads an account in the Royal Gazette of a retreat by Washington to a room full of Redcoats. Selah orders Robeson to leave, and they struggle briefly. Beer is spilled on Captain Joyce, who angrily tackles Selah. Abe attempts to intervene but is stopped by Lt. Simcoe, who puts a pistol to the back of Abe's head. Joyce then throws Abe to the floor and kicks him in the head.

Inside the Setauket church, which has been converted into a military barracks, Major Hewlett orders Joyce to return to England for a court martial on the tavern incident.

Judge Richard Woodhull, Abe's father, visits Hewlett to explain his son's role in the bar brawl. He reveals his son was once engaged to Anna Strong and quotes Shakespeare to illustrate his son's "romantic heart." Hewlett is impressed and the two men bond over their mutual love of the humanities.

Back at the Woodhull farm, Richard warns Abe to stay away from people who chose the wrong side such as the Strongs and Tallmadges.

Ignoring his father's warning, Abe later visits Selah in the stockade and advises him to bribe his way off the Jersey prison ship once he's there. Selah tells Abe he can repay his debt by looking after Anna, but Abe insists he'll repay in cash.

That night, Abe salvages some healthy cabbages from his field.

The next morning, slaves find the dead body of Captain Joyce, who was involved in the tavern brawl. His throat is slit.

In Brooklyn Harbor, two Redcoats visit Rogers on his armed sloop and give the mercenary his payment. They notify him that Major John André wants to meet. Rogers sees André watching from a window on shore.

Rogers meets with André, who asks him to ambush a rebel safe house in Connecticut. Rogers questions the source of André's intel and says he'll only do it for double the price. André refuses to pay and Rogers declines the safe house ambush.

Abe pulls his boat out of the water on the Connecticut shoreline and warily looks for a black market trader. To his surprise, he's met by his childhood friend Caleb Brewster, who's been away for years on a whaleboat in Greenland. They catch up, then settle on a price for Abe's cabbage.

Simcoe, who's been made Captain in the wake of Joyce's death, shows up at Strong Manor and asks Anna about Abe's whereabouts. He then makes advances on her. After she rebuffs him, he informs her he's been billeted at the manor.

While rowing back across Long Island Sound, Abe is intercepted by a pirate sloop trolling the waters.

That night, Ben visits Abe in jail. A surprised Abe hugs his childhood friend, then pleads for his help. Ben demands the name of Abe's illegal trade contact, but Abe stays mum. Ben then asks Abe to spy for the rebels. Abe balks as he realizes the pirate sloop was a clever ruse to recruit him, but doesn't say no. Ben lets him go.

Back on Long Island, Abe pulls his boat on shore and immediately buries his money. Pretending he was mugged, he cuts himself and approaches the road. He sees Robeson and calls for help. A suspicious Robeson runs away.

Abe hobbles into town with a fake limp and notices everyone's eyes on him. Robeson reappears and brings Simcoe and the Redcoats to Abe.

Simcoe brings Abe to the church, where Richard and Hewlett await. When Hewlett demands to know where Abe has been since Joyce's death, Abe admits he was "with the enemy" and explains that he was mugged by pirates while trading on the black market. Hewlett sends Abe home but asks to meet that evening to discuss his captors' identities.

Outside the church, Simcoe warns Abe that he's still a suspect in Joyce's murder.

At Strong Manor, Abe sneaks into the barn and signals to Anna. He gives Anna the cabbage money to repay his debt, then tells her about Caleb and Ben. He says Ben tried to recruit him as a spy. "Don't worry, I won't do it," he says. "Why not?" Anna asks, disappointed. "What are you waiting for? What more do they need to take from us?" She leaves without taking his money.

That night, Abe dresses for his dinner with Hewlett. "Whatever you're doing, don't," Mary says while holding their one-year-old son Thomas. "We can't afford to lose you."

Abe dines with his father and Hewlett at Abe's childhood home. Richard proposes that rather than imprisoning Abe, they have him swear a public oath to the crown. Hewlett embraces the idea, then asks Abe for the names of his enemy captors. Abe provides several names. Richard grows suspicious of the names but remains silent. Hewlett then mentions that Simcoe will be raiding a Connecticut safe house.

After dinner, Abe sneaks into Hewlett's room and finds a dispatch from André. Using a Cardan grille he finds with the letter, he deciphers a message: "Rebel safe house. Connecticut. Meeg's Harbor. Show no quarter."

Abe sprints over to Strong Tavern and pulls Anna aside in the cellar, away from prying eyes. He asks her to hang a black petticoat from her laundry line as a signal to Ben that he has intel for the rebels. Abe says his plan will get rid of Simcoe, who continues to harass Anna. Abe then scrambles to hide as Simcoe enters the room. Anna distracts Simcoe by flirting with him and they leave the room together.

The next day, Anna hangs a black petticoat on her peg line. Abe arrives at a designated meeting spot and is surprised to discover that Caleb is Ben's courier. Caleb explains that Abe passed their test when he refused to turn him over to Ben. Abe insists his spying is a one-time deal.

On the Setauket village green, Abe places his hand on a bible held by his father and publicly swears his allegiance to King George III.

Meanwhile, Simcoe leads a squad of Redcoats to the Connecticut safe house. They charge inside, only to find it empty. A moment later, rebels ambush them.

Afterwards, a wounded Simcoe writhes on the ground. Caleb kicks him unconscious.

Ben places his Ranger bonnet on a Redcoat corpse as a warning message to Robert Rogers. Caleb expresses guilt over letting Simcoe live, given that Abe's sole request was for them to kill Simcoe. "We will, after we pull the truth out of him," Ben says, intent on uncovering the mole in their ranks.

After the crowd who witnessed Abe's oath breaks up, Richard tells Abe he knows he lied about the names of his rebel captors. "I'm done protecting you," he says. As Abe watches his father walk off to meet Hewlett, Abe's son, Thomas, takes his first steps before steadying himself by grabbing Abe's leg.