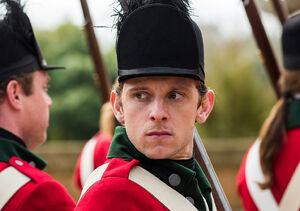 Seeking revenge against Simcoe, Abe travels to New York and meets Benedict Arnold. A visitor from Anna's past comes to the continental camp.

Abe Woodhull arrives at a York City checkpoint and asks where to sign up for Benedict Arnold’s American Legion.

Arnold refuses to hire Abe given his lack of experience in battle but finally relents when Abe insists on avenging his father.

Abe suits up in a red coat and joins his regiment.

Mary Woodhull and Caleb Brewster ride on horseback through the woods. Mary asks if Caleb harbors any ill will about how she sent Colonel Simcoe’s Rangers after him at Whitehall. He says she got closer than any of them to killing Simcoe. Ben Tallmadge and Anna Strong ride up on horses to greet Caleb and Mary on the outskirts of New Windsor camp.

During a musket training drill, Abe daydreams about stabbing Simcoe with his bayonet.

Anna shows Mary to her tent, where they’re greeted by a woman named Mrs. Barnes. Mary introduces herself as Mary Smith from Suffolk County.

Abe befriends Joseph Sturridge in the barracks. Sturridge explains that he enlisted in the Legion on the assumption they will probably never see battle given the disdain that high-ranking officers have for Arnold.

Arnold grumbles about the ineptitude of his men as they fumble their way through a drill. Simcoe and his Rangers arrive at the barracks. Arnold introduces his men to Simcoe. Abe avoids eye contact and tries to hide from Simcoe’s line of sight. He escapes detection by Simcoe, but, unknowingly, another Ranger seems to be staring directly at him.

Ben tells Selah about the plight of the soldiers and worries they may stage a mutiny. Selah asks if Anna is still working for the ring. Ben says that she is integral to their work but understands if Selah wants her to join him in Philadelphia.

Mrs. Barnes calls after Mary, addressing her by “Mrs. Smith.” When Mary fails to respond, Mrs. Barnes gets her attention by calling out her first name.

Mrs. Barnes enlists Mary to help with some sewing. Mary explains that her husband, Abe, is stationed in the South with the Connecticut militia. Mrs. Barnes expresses surprise that there are regiments stationed so far south.

While cleaning toilets in their barracks, Sturridge tells Abe that Simcoe’s Rangers reside in Harlem but often frequent the brothels and gambling dens in Holy Ground.

Simcoe strolls around Holy Ground and alerts two Rangers that they have a new target in the city.

Sergeant Dowling tells Abe that Colonel Cooke has invited him to a meeting at Rivington’s Corner.

At Rivington’s Corner, Cooke chides Abe for joining the regiment, and tells Abe that General Clinton would like to meet him at a Kennedy House party that evening. Robert Townsend eavesdrops on their conversation, and walks up to their table to offer condolences on his father’s death. Abe says he has come to see Benedict Arnold and get justice.

Cicero informs Abigail that Arnold appointed him as his body servant. Abigail forbids him from working for Arnold but Cicero refuses to back out.

Selah informs Anna that he asked Washington to bring his concerns to Congress but that Washington worried he would be overstepping his bounds.

Anna takes Selah to the graves of the executed mutiny leaders and says that they were merely demanding what they were owed. She shares her hope that their deaths will move Selah and Congress to take action.

Ben worriedly informs Caleb that Abe has not yet made contact with Townsend. Mary strides into Ben’s tent and demands an update on Abe. Ben admonishes her for entering his tent in plain sight and refuses to share confidential information. She storms out.

Caleb runs after Mary and maintains that Abe would not want them to help him at the risk of endangering themselves. Mrs. Barnes witnesses their exchange.

At the Kennedy House, Cooke asks Abe to leave the Legion and take over Richard’s post on Long Island. Despite Abe’s protests, Arnold assures Abe that the Legion can make do without him.

Townsend arrives at the party to inform Cooke that Rivington cannot attend. After Cooke leaves, Abe walks past.

Abe walks up to Arnold and is introduced to Peggy Shippen. Abe begs Arnold to change Cooke’s mind but Arnold says he has made his decision. A servant hands Abe a message that reads: “Cloak room.”

Abe finds Cicero waiting for him in the cloak room. Cicero informs Abe that he is Arnold’s body servant and offers to give him intelligence on Arnold.

Peggy blames Arnold for putting Cicero to work without consulting Abigail. She leaves to use the bathroom.

Cicero tells Abe that Arnold occasionally uses a cane. He also says that Arnold visits the outhouse every night at midnight. While in the bathroom, Peggy overhears Cicero relaying the intelligence to Abe.

Peggy tells Arnold that she’s not feeling well and excuses herself from the party.

Arnold asks Cooke to provide hay for his regiment. Cooke denies his request, reminding Arnold that hay is in short supply. Arnold suggests they ask Abe for hay but Cooke declares that Abe is his connection, not Arnold’s.

Townsend pulls Abe aside and asks if he has any intelligence to report. Abe quickly fills him in on Cicero’s intel.

Cooke introduces Abe to General Clinton. Arnold walks up and lays claim to Abe as his new recruit. Cooke glares at Arnold for reneging on his agreement to release Abe from the Legion.

As he leaves New Windsor camp, Selah laments to Ben that Congress should be collecting customs duties from the States.

Selah tells Anna that he would like her to join him in Philadelphia but understands if she would prefer to continue her work with Ben. He gently requests an answer when she is ready.

Two of Simcoe’s Rangers inform Simcoe that the “target” is well-protected at his post. Simcoe nevertheless vows to continue his pursuit of “his old friend.”