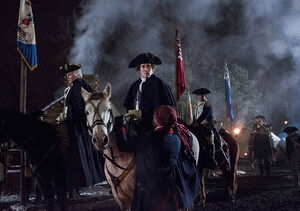 Ben and Caleb arrive at the Continental outpost in Connecticut to rescue Hewlett, only to discover the outpost been ambushed. Ben discovers a grave marked with Hewlett’s name, as well as Washington’s letter of pardon for Hewlett. Refusing to give up on Abe, Caleb vows to personally rescue him from prison.

In the woods, Simcoe nurses his stab wound as a ranger reports Hewlett is nowhere to be found. Surmising Hewlett isn’t capable of eluding them for this long, Simcoe presumes Hewlett dead, and prepares his men to proceed to Oyster Bay.

Meanwhile, Hewlett crawls out of the carcass of a dead cow, where’s he’s successfully been hiding from Simcoe’s rangers.

Caleb and Ben return to Morristown, New Jersey, where they go back inside Sackett’s former workshop. Caleb shows Ben one of the contraptions Sackett left behind, a one-man submersible craft named the Turtle, and reveals his plan to use it to sneak into New York via the harbor.

At Valley Forge, Washington informs his major generals of the plan to retake New York. When General Lee reacts skeptically, Washington guarantees that there are, at most, 3,500 British soldiers stationed in the city — intel he knows thanks to one of Abe’s intelligence reports.

A French officer informs Washington that King Louis is impressed by Washington’s victory at Saratoga and would like to form an alliance. That night, the Continental Army soldiers celebrate the alliance as Washington rides into camp with his men. Washington watches as Arnold struggles to dismount from his horse with his injured leg.

At the sugar house prison, a prisoner informs the rest of the inmates about the French alliance. “It changes everything,” Abe quietly notes.

In Philadelphia, André tells Peggy that the British are evacuating and relocating to New York before French troops arrive. Peggy insists on accompanying him, even if it means eloping and being disowned by her family.

Peggy adjourns upstairs as Robert Rogers arrives to deliver the page from the King’s financial ledger that he recovered from Théveneau de Francy. As he was instructed, Rogers tosses the page into the fireplace. He then demands payment in gold, and André tells Rogers to collect his money at the customs house.

Hewlett hobbles through the woods to the shoreline and spots Robeson unloading black market contraband from a rowboat. Overjoyed at his good fortune, he asks Robeson to take him back to Setauket in exchange for him turning a blind eye towards Robeson’s illegal activities.

Caleb begins his harrowing underwater journey in the Turtle. He surfaces near a dock in New York Harbor, where he’s immediately seen and apprehended by some Redcoats. As the soldiers begin to question him, Caleb quietly triggers the Turtle’s mine cask.

Washington informs Arnold that he’s being promoted to military commandant of Philadelphia. When Arnold fumes after realizing his new post does not involve going into battle, Washington notes that Arnold is not yet fit to return to the field because he is still recuperating from his leg injury.

As the Redcoats hold Caleb at gunpoint, the Turtle’s cask mine explodes. In the ensuing commotion, Caleb shoots his captors and escapes. Later, he steals a Redcoat uniform, cleans up, and shaves off his beard.

Yates brings Abe to his office and hands him over to a Redcoat officer: It’s Caleb. Caleb tells Abe that he’s come to rescue him, and updates him on the Hewlett situation. Abe refuses to leave, saying Washington’s letter of pardon for Hewlett means he must still believe in the Culper Ring. Thinking of Robert Townsend, Abe reasons that Washington will be even more in need of a spy in New York now that the British are relocating their headquarters there. He asks Caleb to visit Townsend and show him how to use the invisible ink.

Hewlett wakes up in his bed at Whitehall and learns that Abe has been imprisoned for spying. He tells Richard and Mary that Abe was acting on his behalf, and that he will arrange for Abe’s release.

André reads Arnold’s latest letter to Peggy and learns that Arnold is going to be stationed in Philadelphia. He asks Peggy to remain there so she can befriend Arnold and then make an introduction to him. When Peggy hesitates, André notes that turning Arnold will earn him approval from Peggy’s father, and they would not have to marry in secret. Peggy finally agrees. Andre cuts off his braid and gives it to her, and they declare themselves married.

In Setauket, Simcoe visits Anna at DeJong Tavern and reports that Hewlett was killed before he could save him. As Anna cries on Simcoe’s chest, Hewlett enters the tavern. When Simcoe slyly tells Hewlett that he tried to save him, Hewlett plays along with Simcoe’s charade and says he outwitted the rebels and escaped. As Anna gathers her things to return to Whitehall with Hewlett, Hewlett and Simcoe stare each other down.

At the Philadelphia customs house, Rogers is ambushed by assassins while attempting to collect his gold. Rogers wins the battle, and keeps one of the assassins alive long enough to demand to know who ordered the ambush. “The King,” says the dying assassin. Stunned, Rogers drops his Royal Messenger badge and walks away.