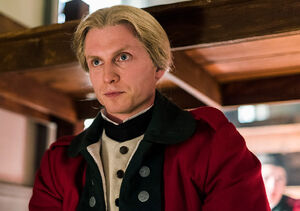 At Hewlett’s home, Abe Woodhull and Major Hewlett brainstorm ways to kill Colonel Simcoe. Every scenario they imagine ends with them being either killed or caught. Abe checks the time and tells Hewlett they can resume the discussion the following day.

Two Rangers watch Hewlett’s home. Abe opens the door at the same moment his regiment marches down Hewlett’s street. He joins the formation without the Rangers seeing him.

Mrs. Barnes gives Mary Woodhull tips on blending in and collecting intelligence in camp. She tells Mary that Ben Tallmadge is General Washington’s head of intelligence and insinuates that Mary can collect information about him through Anna Strong.

Mary walks up to Anna’s tent and tells her she was right about being careful in camp. She asks Anna to meet her in the barn that night.

At the barracks, Joseph Sturridge informs Abe that the Legion recruited a defector. Cicero walks into the barracks and tells Abe that Benedict Arnold requests him at his house.

At Arnold’s house, Cicero brings Abe to Peggy Arnold. Peggy reveals she knows the truth about his plan to kidnap Arnold and offers to help. In his head, Abe imagines a way to kill Simcoe at Arnold’s home while Arnold is away. He tells Peggy that they can kidnap Arnold at the wharf if she lures him there.

Arnold brings Champe to General Clinton and has Champe tell Clinton that Arnold’s defection has inspired future defectors. Arnold appoints Champe recruiting sergeant and tells him to leave to get in uniform. In private, Arnold asks Clinton to send his regiment south. Clinton refuses, believing that there is too little to gain from fighting in the south.

Champe introduces himself to Arnold’s regiment and says he hasn’t been to the city since the summer of ’73, signaling to Abe that he is Ben’s spy. In private, Champe tells Abe that they must signal back to camp that night.

In the barn, Mary informs Anna and Ben that there is indeed a spy in camp but refuses to reveal more until they update her on Abe. Anna assures Mary that Abe is safe in York City. Mary reveals that Mrs. Bates is Mrs. Barnes’s real name, and that she knows Ben is head of intelligence. Ben orders Mary to find out if Mrs. Barnes has associates in camp and who she reports to.

After dark in Rivington’s basement, Abe introduces Champe to Townsend. Champe instructs Townsend to place a “3” in the Gazette ad to inform Ben that they will capture and deliver Arnold in three nights. He informs Abe that they plan to take Arnold during his midnight visit to the outhouse. Abe argues that Champe is moving too soon. Champe threatens to kill Abe if he botches their kidnapping attempt. Townsend confirms he’ll be able to send the signal.

In camp, Mrs. Barnes tells Mary that her husband, Joseph, is stationed with General Clinton’s army in New York.

On a city street, Abe signals to Abigail he wants to talk. He tells Abigail that Peggy should bring Arnold to Slip 23 on Thursday night before midnight. Abe reveals that he is planning to kill Simcoe at Arnold’s house and will need Cicero to summon Simcoe and seat him in the parlor. When Abigail refuses, Abe tells her that Akinbode showed up in Connecticut and killed many Rangers, making him a sure target for Simcoe. Abigail agrees to let Simcoe into the house but tasks Abe with sending the summons.

In camp, Caleb experiences flashbacks to Simcoe’s torture. Ben orders Caleb to pick up Arnold in York City the following day. Caleb tells Ben that he will enlist Teddy Beddows to be his second rower. Ben comments on Caleb’s excessive drinking.

In the barn, Ben tells Mary and Anna that Abe should be back in camp within a few days. Mary informs Ben that Mrs. Barnes has a husband in the British army but is still not certain if she has accomplices in camp.

At Rivington’s Corner, Arnold grumbles to Simcoe about Clinton’s unwillingness to send his regiment south. Simcoe learns that Abe joined the Legion. Townsend overhears the conversation.

Teddy informs Ben that Caleb is too drunk to travel to York City.

Ben and Teddy find Caleb drunk by a tree. Caleb laments that he betrayed his friends to Simcoe.

At the barracks, Abe swaps duties with a fellow soldier so that he can guard Arnold’s house that night. He tells Champe that plans have changed and that Champe will kidnap Arnold at the wharf instead of at his home.

Abe reveals his murder plot to Hewlett and asks Hewlett to fake a summons from Arnold to Simcoe.

Townsend visits the Legion barracks under the pretense of delivering Arnold’s bar tab. Champe sees Townsend and tries to slip out so that they can talk in secret, but Dowling orders him to stay inside.

Corporal Reid informs Simcoe that Abe arranged to take guard duty that night at Arnold’s home. When Reid leaves, he asks his Ranger how long Abe was at Hewlett’s house. He speculates that Arnold is their target.

That night, Peggy gets in a carriage with Arnold and quietly signals Abe to proceed inside the house.

Simcoe receives a summons to Arnold’s house, surmising that he is Abe’s intended target.

Abe sends Sturridge home from guard duty at Arnold’s house. He goes inside and readies his knife.

Cicero lets Simcoe into Arnold’s house and gestures for him to sit in a chair that would allow for Abe to sneak up behind him. Simcoe sits in a different chair. Cicero tries to warn Abe that Simcoe has diverged from their plan.

Arnold returns home earlier than expected and gives Simcoe a message from Clinton. Simcoe reads the message and immediately leaves.

Abe escapes through the back door and runs to the barracks.

Arnold tells Peggy that Clinton is sending his regiment to Virginia. He orders Cicero to come with him.

At the barracks, Arnold informs his regiment that they are leaving immediately for battle in Virginia.

Arnold’s men, Abe and Champe among them, board ships at the docks.

Ben and Teddy wait at the slip. Ben peers through a telescope and sees Arnold’s regiment shipping out.

On the ship, Simcoe looks pointedly at Abe while telling Arnold that he looks forward to settling accounts on the field.