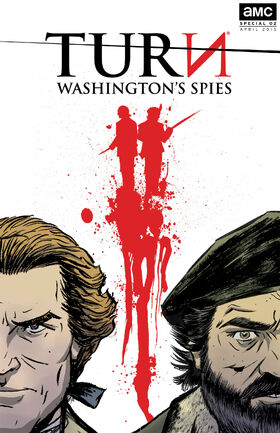 George Washington and Robert Rogers weren’t always enemies. In fact, they were once warriors who fought on the same side, until a series of events pitted the man of reason and the man of blood against one another.

In 1755, near the Monongahela River in Pennsylvania, General Edward Braddock and Colonel George Washington ride together, leading British forces to Fort Duquesne. The two discuss General Braddock's decision to continue pressing on after their expedition's problem with foul weather and scurvy. Suddenly, a shot is fired and strikes a British soldier next to Colonel Washington in the chest.

Later, near Crown Point, New York, Robert Rogers leads the Queen's Rangers to a French and Indian fortification, with the intentions of capturing a prisoner of war. As they approach, Rogers throws an axe into the head of a French soldier and is soon noticed by an Indian, being called Wobomagonda ("White Devil").

Rogers and his men fight the French and Indian troops, with Rogers shooting and igniting gunpowder, causing it to explode and catching the encampment on fire. Rogers keeps the fight going as he leads his men through the attack.

Later on, Colonel Washington and his men have buried General Braddock and hold a memorial service for him. After the service, Colonel Washington rides to Fort Cumberland, Maryland and is complimented by his superior officer on his service during the battle, having had two horses shot out from under him and surviving without a scratch on him.

Colonel Washington is informed that many now call him the Hero of Monongahela. However, his superior officer informs him that his surrender at Fort Necessity one year prior and the loss of General Braddock have caused the upper ranks to re-evaluate the promotion that he has been seeking. He is informed that he will remain in the Provincial Militia, giving support to the Royal Army officers.

Colonel Washington is ordered to ship all of General Braddock's belongings to General Johnson, including the blade that General Braddock had given him during the battle. He agrees to the order as he leaves his superior officer's tent.

Later, the same officer meets with Rogers, who informs the officer that the prisoner couldn't be secured, though intelligence information could. The officer informs Rogers that he will recommend to General Amhearst that he be promoted to major, but Rogers cares little for a promotion. During the conversation, the officer examines General Braddock's blade, as mentions his displeasure with Colonel Washington, who Rogers says should be revered, not reviled.

Rogers is ordered to take the Queen's Rangers and continue raiding French encampments in the north, to get behind enemy lines and do whatever it takes to end the war. Rogers agrees as the officer leaves, with Braddock's blade remaining on his desk. Rogers takes the blade.

In 1775, Robert Rogers arrives in America from London. As he is urinating, he is threatened by two men, asking for his coin. He warns them not to pursuit, but they ask again, causing him to attack them and hold one of them at knifepoint with one of their blades. British soldiers arrive and have him drop the weapon. He does, introduces himself and asks where to find the Duchess of Gordon, where he has a meeting with General Henry Clinton.

At the meeting, Rogers offers his services to General Clinton and the British. However, another man tells him not to be too hasty. General Clinton introduces him -- Captain John André, one of his most trusted aides. General Clinton tells Rogers that his offer will be considered. Rogers leaves, telling them not to wait too long to decide.

Rogers then takes his services to the newly appointed General and Commander-in-chief of the Continental Army, George Washington, also returning to him the blade that Braddock had given him years earlier. Rogers offers his service to Washington as well, but Washington informs him that he is aware of his meeting with the British. Washington places Rogers under arrest and orders him to be taken to New Hampshire, to be tried for treason.

On the way to New Hampshire, Rogers kills one of the Continental soldiers transporting him and knocks out the other, soon returning to Clinton and André, warning them that Washington is wily, dangerous and that even if he is outnumbered, he can still achieve victory. Clinton and André accept his offer.

In the autumn of 1776, General Washington leads his soldiers on the battlefield against the British during the Battle of Harlem Heights, fighting alongside them and obtaining a victory after the British retreat. He later observs their encampment for movement and notices a stalemate, hoping that his troops in New Jersey have obtained similar favor.

In New Jersey, Rogers and the Queen's Rangers have killed all of Captain Benjamin Tallmadge's regiment. Having survived, Ben kills a Queen's Ranger and takes his jacket and bonnet, to disguise himself. Rogers soon takes notice and fires a shot into Tallmadge, who escapes.

Washington is informed by word of the advance New Jersey unit about the loss of Tallmadge's regiment. Washington, angered, swipes the papers on his desk into the air. Elsewhere, Rogers informs a Queen's Ranger that he intends to retrieve the bonnet that Ben took.

Washington sends for a messenger, to get a message to Westchester County, to be delivered to Nathaniel Sackett, a civilian, in the hopes of recruiting others like him, having need of their services.

"Stand with me, men! Fight!"
―George Washington to British Army forces during the Battle of the Monongahela.

"Do not yield an inch!"
―George Washington to Continental Army forces during the Battle of Harlem Heights.