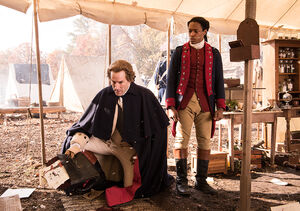 Abe makes one last effort to recruit a spy inside New York. Ben must determine who is a double agent.

In a flashback to 1775, Robert Rogers visits General Washington to offer his services to America. Washington correctly suspects Rogers of spying and orders his men to haul Rogers away. “You will live to regret it!” Rogers cries out.

As Abe packs for his next trip to York City, Richard warns him to stop his charade with Hewlett or else he will look into Abe’s true motives for visiting York City.

At the Continental camp in Valley Forge, a Redcoat named Arthur Sutherland surrenders himself. Ben interrogates Sutherland to discern whether he’s a spy or a true defector. To prove his loyalty, Sutherland warns that a civilian named Bill Shanks will soon visit them with a “wild claim,” with the true intention of spying for the king.

Caleb returns from New Jersey with the intel from the wax bust. Sackett excitedly reads the intel and rushes it over to Washington. Upon reading it, Washington sends for Théveneau de Francy, the French secret intelligence officer.

Simcoe arrives in Setauket with his Rangers and tracks down Anna. Hewlett yells at Simcoe for returning to Setauket. Unfazed, Simcoe asks to stay at Anna’s tavern. Anna offers up her room, claiming Hewlett had just invited her to stay at Whitehall. Hewlett happily plays along with Anna’s impromptu plan.

Abe visits Townsend in York City. Townsend immediately tries to send him away, but Townsend’s father, Samuel, invites Abe to stay for a meal. Samuel, who has been apprised of Abe’s mission, quietly assures Abe that Robert will join the cause. Abe says he needs a decision by nighttime.

De Francy reads the intel — a page torn from King George’s financial ledger which shows that England is virtually bankrupt. “It is time to unite,” Washington declares, saying this is proof to France that they can win this war. De Francy vows to take the intelligence straight to King Louis. To throw off Robert Rogers’ scent, Washington sends out decoy detachments so that de Francy can escape in the guise of a fur trader.

A dragoon informs Ben that a civilian has arrived with urgent news for Washington. Ben interrogates the civilian, whose name is Bill Shanks — just as Sutherland predicted. Shanks warns that someone close to Washington will attempt to assassinate him.

Abe and Samuel corner Townsend to convince him to spy for Washington. Townsend vehemently refuses.

Ben and Sackett interrogate Shanks, who says he learned about the assassination plot when he eavesdropped on two Royal officers — one of whom had a blond braid. Ben relays this information to Sutherland, who identifies the blond officer as John André. To test Sutherland, Ben says Washington might leave camp in response to Shanks’ report of an imminent attack. Sutherland advises them to keep Washington in Valley Forge, leading Ben to presume that Sutherland wants to keep Washington near so that he can kill him.

Ben tells Washington about Sutherland and Shanks. Washington discovers Shanks’ name on a list of men who were reported missing at a recent massacre and accuses Shanks of deserting and defecting to the enemy. Ben maintains his theory that Shanks is telling the truth, but Washington accuses him of poor judgment and orders Sackett, not Ben, to debrief Sutherland.

Samuel stops by Abe’s room and guarantees that Robert will change his mind by the time of Abe’s next visit. Abe, who is concerned about Richard’s warning, racks his brain for a plausible intelligence report that would satisfy both Hewlett and Richard. He hatches an idea: He will tell Hewlett that he found an active Sons of Liberty dead drop. He pens a fake note, “The Sons of L will meet tomorrow.”

In a dark street, Abe places the note behind a brick on a crumbling wall. A homeless man yells at him, attracting the attention of nearby Redcoats. Abe retrieves the note and runs. The Redcoats chase Abe down and discover his note. “We just caught us a spy,” a Redcoat says.

The next day, Sackett interrogates Sutherland in his tent. Meanwhile, Ben continues to grill Shanks and learns that one of the Royal officers who Shanks overheard had a scar on his cheek — just like Sutherland. Ben sprints over to Sackett’s tent but it’s too late: Sackett lies dead in a pool of blood.

Ben informs Washington that Sutherland stole vital documents, some of which contained the name Culper. He angrily storms off, accusing Washington of being blind.

That night, Rogers ambushes de Francy as he secretly escapes through the woods. He slits de Francy’s throat and leaves with the intelligence in hand.

Officers beat Abe in a cell. Abe admits to writing the note but only in order to lure rebels. He urges them to corroborate his story with Major Hewlett. Meanwhile, a crew of Continental soldiers infiltrates Whitehall and hauls Hewlett away as retribution for the death of their captain — the murder that Simcoe carried out then pinned on Hewlett with the blood-scrawled note, “Compliments of Major Hewlett DEATH TO ALL REBELS.”

"It is time to unite."
―George Washington to Théveneau de Francy.

"Certain I was right. I was certain."
―George Washington to William Lee.