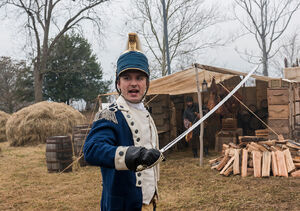 Benedict Arnold rounds up spies in New York. Abe plots to destroy essential British supplies, but he will need his father's help.

British soldiers arrest citizens in Coram and the Battery.

Hercules Mulligan, a local tailor, stops by Rivington’s Corner and quietly confronts Robert Townsend about his coded advertisements in the Gazette. He assures Townsend that they have friends in common.

General Benedict Arnold enters and seizes Mulligan to question him about spy activities. Mulligan mocks Arnold for being a turncoat, prompting laughs from the patrons. Arnold hauls Mulligan away and orders Rivington to print a notice that General Clinton has appointed him Spyhunter General.

"His hunt has just begun."
"He will be the hunted. We will lure him out of the city and kill him."
"No. I will not lower us to assassination. He must be captured alive and returned to camp."
―George Washington and Alexander Hamilton discuss Benedict Arnold.

Ben Tallmadge and Alexander Hamilton meet with General Washington at the Continental Army camp in New Windsor, New York. They review a list, published in the Gazette, of 40 men that Arnold arrested for possible spy activities. Ben asserts that Arnold is putting on a show and doesn’t have hard evidence on Mulligan. He also mentions that Arnold wrote him a letter to try and convince him to turn. Surprised by Ben’s disclosure, Washington orders Ben to submit a full report on how to capture Arnold.

Anna Strong runs a trading post in camp. She goes to speak with Ben. Hester and Mrs. Barnes, her employees, gossip and speculate about her relationship with Ben.

Ben gives Anna a letter from Selah, who still thinks she works for the ring in Setauket and is worried about her safety. Anna asks Ben to assure Selah of her safety so that she can continue working for the ring from camp.

Caleb rushes to Abe’s farm in Setauket to bring the Woodhulls to safety, in light of Arnold’s recent espionage arrests. Abe, seemingly oblivious that he is in any danger, calmly invites Caleb to lunch.

At Whitehall, Abe assures Caleb that Arnold knows nothing about the Culper Ring. He informs Caleb that Wakefield is stockpiling hay to fuel the army through winter. Caleb asks Abe to delay the hay shipment by one day so that he can return with men to burn the hay. Mary suggests they throw a party on the eve of the shipment and ply the British officers with alcohol to slow them down the next day.

Arnold attends a soiree in York City and asks Colonel Cooke to speak with General Clinton about funds for the regiment that Arnold was promised. Cooke storms off after Arnold inadvertently insults him.

At the same soiree, Rebecca introduces Peggy Shippen to Philomena Cheer. Peggy “praises” Philomena’s ability to pretend to be women who she is nothing like — a thinly veiled reference to Philomena’s relationship with John André.

Ben and Caleb request permission from Washington to lead a mission to destroy the British hay supply in Setauket. Initially, Washington questions Ben’s methods, presumably due to resentment over Ben not immediately divulging the receipt of Arnold’s letter. But, after Ben stands firm in his commitment to Washington, the general approves the mission.

Townsend allows Captain Simcoe to enter Rivington’s Corner after a guard bars him from entry. Simcoe introduces himself to Arnold, who questions Townsend about Mulligan. Arnold takes notes as Townsend answers his questions. Simcoe stares at Townsend.

Rattled by Simcoe’s gaze, Townsend goes to his room and burns his spy tools.

Hester and Mrs. Barnes see Anna walking with Abigail and gossip about them.

Abigail tells Anna that she wants to move to York City to earn enough wages to find Jordan in Canada.

Meanwhile, Jordan arrives in York City and looks for Abigail at André’s old house. The maid tells him the house now belongs to Arnold and that Abigail crossed the river to the rebel side.

Philomena “accidentally” runs into Peggy on the street. She brags that André once told her she “outshone” Peggy.

Abe visits Captain Wakefield to seek reimbursement for the farmers’ hay. Instead, Wakefield gives him a “King’s promise” of payment. Abe invites Wakefield and his officers to Whitehall for dinner. Wakefield gives Abe some money to pass along to Richard, promising the other half once the pork reaches the city.

In camp, Ben, Anna and Caleb plan their attack on Wakefield’s garrison. As Ben and Anna quibble over a tactical detail, Caleb jokes that they fight like lovers. Anna points out that everyone in camp believes she and Ben are lovers and suggests they use the gossip as cover for their frequent meetings.

At Peggy’s insistence, Freddy tells Arnold that he is Philomena’s hairdresser and that he heard her say treasonous things. Peggy points out that Philomena has been seen with bachelor officers and suggests she might be seducing them for secrets.

Arnold’s men seize Philomena in the street as Peggy watches.

Abe, Richard and Mary host a dinner for Wakefield and his officers. Abe and Mary try to serve them more liquor but are interrupted by Maarten DeJong and a group of farmers, who Richard had secretly invited to disrupt Abe’s plan. The farmers complain to Wakefield upon realizing that they won’t receive payment for the hay before it’s shipped. Richard offers to arbitrate a meeting between Wakefield and the farmers the next morning to resolve the matter.

The next day, Ben and Caleb arrive outside Wakefield’s fort with their men. Meanwhile, Richard oversees a meeting between Wakefield, his officers, and the farmers.

Ben’s team storms the garrison, which is poorly defended in the absence of Wakefield and his soldiers. They burn the hay.

A soldier alerts Wakefield that the fort is on fire.

As Wakefield’s men rush to the burning fort, Abe asks Richard why he didn’t share his plan. Richard admits he was playing it against Abe.

Arnold discovers Peggy reading André’s journals in his office. Peggy quickly explains that her curiosity was piqued by Philomena’s arrest. She points out that André was pursuing a spy ring and wonders if a lady named “355” was Philomena. Arnold glances at André’s journal and notices a code for a “whaleboat courier.” He recalls that Ben’s friend Caleb operated a whaleboat and deduces that Caleb is the courier for the ring.

"His hunt has just begun."
"He will be the hunted. We will lure him out of the city and kill him."
"No. I will not lower us to assassination. He must be captured alive and returned to camp."
―George Washington and Alexander Hamilton discuss Benedict Arnold.