The Battle of Setauket

View source
watch 01:25
Jurassic World: Dominion Dominates Fandom Wikis - The Loop
Do you like this video?
Play Sound
The Battle of Setauket 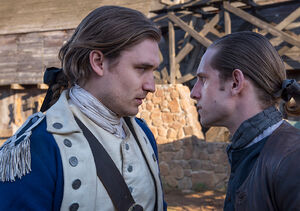 Ben and Caleb lead a raid on Setauket to save the Patriot families. Mary grapples with the realization that Abe is a rebel spy.

Ben and Caleb arrive on the Long Island shore. Caleb is insistent that they attack immediately, but Ben decides to hold off after realizing that some of the other whaleboats, including Selah’s, were waylaid during their crossing of Long Island Sound.

Abe arrives home to find Mary there. To assuage her fears that Richard’s attacker will come for them, Abe confides that Simcoe shot Richard. She refuses to believe him and then questions his fidelity. He disrobes her and they make love on Ensign Baker’s bed.

Abe awakens early the next morning. Mary is already up and dressed, expecting him to join her for a shopping trip.

On the shoreline, as Ben and Caleb strategize on how to proceed with entering Setauket, the rest of the whaleboats finally arrive. In the early morning light, they're spotted by Setauket residents William Blaine and his young son, Tom, who are headed to the shore to fish. Caleb knocks William unconscious, but Tom escapes on a horse.

At the church, Tom tells Simcoe that Ben is descending on Setauket with hundreds of soldiers. Simcoe retrieves the rebel prisoners from the tavern cellar, intending to hang them before Ben and the rebels arrive.

Hewlett suits up for battle and dispatches an officer to request reinforcements from Captain Floyd in Sag Harbor. He orders Richard, still recovering from his gunshot wound, to stay at Whitehall and rest.

As the Redcoats place Moses Paine’s head in a noose, Ben’s men charge across the field. Simcoe kicks out the gallows platform, hanging Paine, then takes the other prisoners to the church. Ben sees Simcoe holding a gun to Rev. Tallmadge’s head and orders a retreat.

In town, Ben tells Caleb to gather the townspeople and the captured Redcoats in the tavern. Selah arrives with his men, announcing himself by shooting the tavern's sign, which now says DeJong Tavern rather than Strong Tavern. He strides up to Anna, who is stunned to see him, and kisses her. Abe glares at Caleb, who shrugs.

As Ben follows Hewlett’s movements through his spyglass, he tells Caleb to collect the British stash of gunpowder from the schoolhouse.

Hewlett forbids Simcoe from hanging the rest of the prisoners. He peers through his spyglass and sees Caleb gathering the casks of gunpowder. “You secured the prisoners but not the powder!” he hisses at Simcoe, ordering his men to fire cannons at the schoolhouse.

Selah learns that Anna was forced to sell the tavern to DeJong and vows to dispute the attainder with Richard.

The Redcoats fire at the schoolhouse, and it blows up in a fiery explosion. Richard arrives at the church unexpectedly, and Hewlett ushers him inside.

At the tavern, Ben orders Selah to take his men and attack Hewlett’s flank. At Mary’s prodding, Abe tells Ben they’ll never take the church garrison and will end up getting all of the prisoners killed. Ben introduces himself to Mary, who he’s never met before, and notes, “I seem to remember your husband as a much quieter man.”

Simcoe urges Hewlett to keep bombarding the town, but Hewlett refuses to level Setauket. Selah’s men fire at the garrison, forcing Hewlett to retreat into the church. Simcoe uses Rev. Tallmadge as a human shield.

Ben enlists Abe to deliver peace terms to Hewlett, and asks Anna to unlock the cellar so they can discuss the terms in private.

In the cellar, Abe, Ben, Caleb, and Anna convene. Abe angrily asks why they’re attacking Setauket, and Ben responds that they learned about the hangings and rushed there to stop them, with no time to send a warning. Abe explains that their death sentences were reduced to prison time on the Jersey, and Ben replies that Samuel died on the Jersey and that he refuses to let his father die the same way. Anna yells at Ben and Caleb for keeping Selah’s survival a secret. Abe declares he is done spying for Ben.

Waving a white flag, Abe approaches the church. Inside, he tells Hewlett that the Continentals are willing to trade the captured Redcoats for the rebel prisoners. Simcoe screams at Hewlett to kill the enemy and grows even more agitated when Hewlett considers the peace terms. “All they require is proper motivation!” Simcoe shouts. He drags Lucas Brewster outside, shoots and kills him, and screams at the rebel lines.

Simcoe reenters the church, and Hewlett orders his men to arrest him. Simcoe resists, and Hewlett’s men drag him to the floor. “You deserve what’s coming to you, oyster major!" Simcoe shouts. Hewlitt responds by roughly gagging Simcoe.

Richard advises Hewlett, who now fears he’s been forced into a fight to the death, to let the prisoners go so Rev. Tallmadge can convince Ben to leave.

Hewlett releases the prisoners, and the rebels fall back. Hewlett and Ben exchange bows from across the field.

In town, Abe tells Ben that he wants to keep spying -- but as Culper, not Culpeper. Mary hugs Abe. Abe and Anna exchange sad glances as Anna leaves with Selah.

Captain Floyd finally arrives with his men, frustrating Hewlett with his tardiness.

Selah helps Anna into one of the whaleboats and it shoves off. A group of pursuing Redcoats arrives and watches from the shoreline as they row away. Abe arrives as well, and he and Anna lock eyes across the water. “I’m sorry,” Anna tells Selah, “The cause needs me here." She jumps overboard and swims to shore. Abe helps her out of the water as Selah watches them from the boat.

In New York, John André informs Robert Rogers that as a result of Rogers firing on Continental soldiers during the prisoner exchange, General Howe has ordered Rogers be relieved as head of the Queen’s Rangers. Rogers approaches André menacingly, but pauses as he realizes André has men stationed just outside the room. Rogers threatens repercussions and then exits, cackling as he departs.

At home, Abe walks in to find Mary burning his codebook. “You are a traitor and an adulterer and a spy for Washington!” she screams. Ensign Baker walks in, having overheard everything, and says he must turn Abe in. Abe draws his gun on Baker, then offers to run away and never return. “You may be a treasonist Mr. Woodhull, but I can’t be,” Baker replies.

As Baker reaches for his rifle, Abe shoots and kills him. Mary immediately invents a cover-up story: Baker was shot while trying to stop some fleeing rebels, who then burned down the house. “I know how to clean up a mess,” Mary says.

Mary lights a candle and begins setting the curtains on fire. Outside, Abe holds Thomas. Mary joins him, and they watch as their house goes up in flames with Baker’s body inside.