The Black Hole of Calcutta

View source
watch 01:25
Jurassic World: Dominion Dominates Fandom Wikis - The Loop
Do you like this video?
Play Sound
The Black Hole of Calcutta 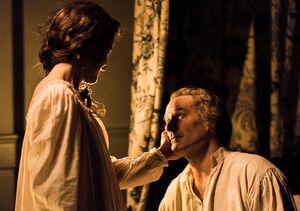 When one of the Culper Ring members is captured, Arnold seeks to interrogate him - with the help of a ruthless Colonel Simcoe.

Caleb Brewster rows his boat to the Connecticut coast to trade some goods with his contact, Robbie. British soldiers ambush Caleb and knock him unconscious. In return for Robbie’s cooperation with Caleb’s capture, the soldiers release Robbie’s brother, Mr. Betters, whom they held captive.

Continental soldiers salute General Washington as he walks through camp. A soldier grumbles to another soldier that Washington is a “tight-ass.”

Washington asks Ben why Caleb was in Connecticut. Ben explains that Caleb sells goods on the London trade to provide cover for his trips to Setauket. Ben guesses that Arnold arrested Caleb because he knows Caleb and Ben are close associates, but he doubts Arnold knows anything about Culper Sr. or Culper Jr. Washington demands a full report on all remaining assets by the morning.

"You quarrel over disrespect to me, but in doing so, you disrespect yourselves and this army!"
―George Washington to two fighting soldiers.

Washington breaks up a fight between the two grumbling soldiers in camp. One of the soldiers complains to Washington about not getting paid.

Martha Washington stops at Anna’s trading post and trades her shawl for a spork. She praises Anna for turning her cart into a trading post and for providing a meeting point for the women and soldiers of the camp.

A soldier brings an officer’s laundry to Hester. She refuses to wash clothes while her husband, a soldier, isn’t getting paid.

A Ranger informs Simcoe that Arnold has captured Caleb Brewster.

Ben goes to Whitehall to seek Abe’s help in rescuing Caleb. Abe and Richard hatch a plan for Ben to “kidnap” them and trade them for Caleb.

Anna goes to Hester’s tent and discovers she has a child. Anna warns that she may be banished from the camp if she continues to shirk her laundry duties. She offers to help Hester with the laundry but Hester refuses.

Simcoe visits Arnold and informs him that he, too, had been on the hunt for a spy ring on Long Island. He asks to sit in on Arnold’s interrogation of Caleb.

Simcoe waits in the hall as Arnold interrogates Caleb. Caleb points out that Arnold cannot hang him without a confession. He proceeds to mock Arnold for being a turncoat. Arnold storms out and tells Simcoe, “He’s all yours.” Simcoe walks in and punches Caleb.

In bed, Washington tells Martha that he feels responsible for his bankrupt army. He worries that his tactic against the British — outlasting them until their finances are sapped — is backfiring. Martha offers to enlist help from Congressmen’s wives to raise money for the colony, in an effort to organize women across the country. They kiss.

Mrs. Barnes informs Anna that Washington is banishing Hester from the camp to make an example of her refusal to work.

Anna sees Martha Washington and asks her to help Hester, but Martha insists that everyone must do what they can.

Anna seeks help for Hester from Ben, but he defends Washington’s decision. Ben’s friend from Setauket, Aden, arrives to assist in rescuing Caleb. Ben orders Aden to round up men to kidnap some “rich Tory bastards,” Abe and Richard, and trade them for Caleb. After Aden leaves, Anna chastises Ben for failing to tell her about Caleb. She suggests they demand a ransom to make the kidnapping more convincing.

Simcoe tortures Caleb and asks him to sign a confession. Caleb spits in his face. Simcoe cuts Caleb with his sword and slathers salt on the wound. Simcoe reveals he was born and raised in India and watched his father thrown into the “Black Hole of Calcutta” where he died, and now he teaches “mercy is a weakness” to colonists across the country. When Caleb still refuses to talk, Simcoe places a hot sword on his chest. Caleb screams.

Ben and his men arrive at the Woodhull farm to “abduct” Abe and Richard. Just then, Wakefield and two of his officers ride by on horseback and catch Ben in the act. Ben and his men shoot Wakefield and his comrades before they raise an alarm, while Richard tries to stop them. Richard kneels by Wakefield’s side while Wakefield gaps his final words, but Ben pulls him away.

Camp followers gather to watch a wagon transport Hester and her baby out of camp.

Colonel Cooke storms into Arnold’s home and demands to know who Caleb Brewster is. He tells Arnold that Caleb’s friend captured Abe and Richard Woodhull and is now demanding Caleb’s release, plus a ransom.

At Bridewell Prison, Cooke finds Caleb barely conscious. He denounces Simcoe’s brutal interrogation tactics and worries that the rebels won’t release the Woodhulls given Caleb’s physical state. Before releasing Caleb, Simcoe quietly thanks him for the rebel names he divulged in “the twilight of pain.”

"You quarrel over disrespect to me, but in doing so, you disrespect yourselves and this army!"
―George Washington to two fighting soldiers.

"Now, you know who I am. And I know who you are."
"All I know is I'm looking at a dead man."
"If you think your friends will come for you, they won't."
"Oh, it don't matter. I know they'll kill you, and that's as good as me doing it."
―John Graves Simcoe and Caleb Brewster.