View source
watch 01:25
Jurassic World: Dominion Dominates Fandom Wikis - The Loop
Do you like this video?
Play Sound
The Prodigal 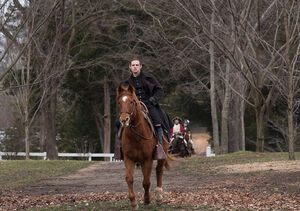 Abe returns from prison with critical intel. Tensions rise between Hewlett and Simcoe. Arnold rescues Peggy from a rebel mob.

In Setauket, Cicero finds the body of a Redcoat soldier hanging from the gallows.

As the townspeople gather around the gallows, Appleton discovers a suicide note on the body. Hewlett regards the note with suspicion, and all but accuses Simcoe of orchestrating the Redcoat’s death. In turn, Simcoe all but admits to the accusation, and issues a thinly veiled threat against Hewlett’s men.

Having received word from Hewlett, Yates releases Abe from prison. Abe returns to Robert Townsend’s boarding house, only to find that Townsend has sold it. The new owner gives Abe a bill that Townsend left for him.

At Whitehall, Hewlett informs Anna that John André has invited Cicero to reunite with his mother Abigail by coming to live with him in New York. Hewlett then confides to her that Simcoe likely staged the Redcoat’s suicide, and that Simcoe was responsible for Hewlett’s imprisonment by the Continental Army. Anna suggests there’s a way to remove one of Simcoe’s key players from the equation. Richard overhears their entire exchange.

At DeJong Tavern, Anna tells Cicero he is going to go live with his mother. She then asks Jordan to escort Cicero safely to New York. Jordan, who is in love with Abigail, gruffly declares that Simcoe can’t spare him, but agrees to ask.

Abe visits Robert Townsend’s farm in Oyster Bay. Robert’s father, Samuel, informs him that Robert finally decided to join the rebel cause after Simcoe and his men burned down their stables. When Samuel mentions that Robert left him a note, Abe realizes that Robert must have used invisible ink to write him a message on his bill.

In Philadelphia, Peggy and Judge Shippen are attacked by an angry mob while riding home in their carriage. Benedict Arnold breaks up the mob and introduces himself to Judge Shippen.

In Washington’s tent, Major Bradford, General Charles Lee’s aide, briefs Washington on a plan to attack the British as they retreat to New York. Washington asks Lee if he endorses the plan, given that he usually acts with caution. Lee admits that he has learned from Washington’s bold field tactics, and apologizes for ever doubting Washington’s leadership.

Outside, Ben tries to speak with Washington but is stonewalled. Billy Lee pulls Ben aside and warns him that Washington just gave control of half of the army to General Lee after Lee fooled him with an apology.

Abe arrives in Setauket and dashes to his spy cave to apply reagent to his bill and read Townsend’s secret message. Before he can do so, he’s intercepted by Corporal Eastin, who’s been instructed by Hewlett to stay by Abe’s side. Simcoe arrives on the scene, and pressures Abe to ride one of his ranger’s horses.

With Simcoe on his heels, Abe rides to Whitehall, and joyfully reunites with Thomas and Mary. Richard observes the reunion from the porch, but does not greet his son. Anna and Hewlett also witness the reunion, and Hewlett stops Anna from going to Abe.

At Valley Forge, Ben tells Bradford he wants to offer up his dragoons to General Lee and apologizes for their past disagreements. Bradford accepts Ben’s offer, but reminds Ben that he will answer directly to him.

Peggy meets Benedict Arnold in the garden of Benjamin Franklin’s home, where Arnold has now taken up residence. He kisses her and suggests they marry right away. Caught off guard, she pulls away and says he must first obtain her father’s approval.

Caleb arrives at a drop box on Long Island but finds it empty.

Abe and Mary lie in bed with Thomas nestled between them. Abe tells Mary he is giving up spying. “Don’t lie,” she says, calling his bluff. They lock hands.

In the woods, Simcoe asks Jordan to spy on Abe. Jordan agrees, then asks for some time off to accompany Cicero to New York. Simcoe correctly guesses that Jordan’s ulterior motive is to see Abigail, and grants the request.

Hewlett and Simcoe meet for a parley. Simcoe demands that Hewlett resign and leave Setauket. When Hewlett refuses, Simcoe tries to goad Hewlett by confessing he was the one responsible for killing Hewlett’s horse, Bucephalus, as well as for shooting Richard. Shocked by Simcoe’s revelations, Hewlett vows Simcoe will eventually be destroyed by his own “inner beast.”

In the middle of the night, Abe sneaks to his spy cave and finds Anna there waiting for him. They embrace and kiss. After applying the invisible ink reagent to Townsend’s note, Abe learns that Townsend used the proceeds from the sale of his boarding house to buy a coffee house that is popular with senior officers in the British army and government. Townsend reports that he has already learned of a plot against Washington.

Two of Simcoe’s rangers, MacInnis and Tanner, barge into the spy cave and realize that Abe and Anna are spies. They force Abe to lead them to his meeting spot with Caleb. On the way, Abe secretly passes his concealed knife to Anna.

MacInnis sneaks up on Caleb and knocks him unconscious. Tanner then forces Anna to kiss him and unbuckle his pants. She stabs him with Abe’s knife. Caleb regains consciousness and helps Abe and Anna kill Tanner and MacInnis.

Intending to pin the murders on Hewlett’s men, Abe tells Caleb to drop the bodies in Long Island Sound. He then gives Townsend’s note to Caleb and urges him to deliver it to Ben and Washington right away.

Meanwhile, someone watches them from the woods.