Thoughts of a Free Man 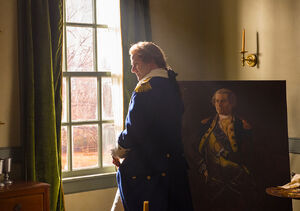 At St. James Palace, King George III sits for Patience Wright as she sculpts his bust. The Chancellor of the Exchequer, carrying a financial ledger, interrupts the session, and the throne room is cleared.

In an antechamber, Robert Rogers tells the King’s manservant that he has been waiting for days to see the King. He’s interrupted by the Chancellor, who storms out of the throne room as King George screams in his wake. As Patience re-enters the room, King George rants about the cost of ruling the colonies and tears apart the financial ledger. Patience quietly sweeps a page from the ledger underneath her drop cloth.

That night, the Chancellor and his men raid Patience’s studio, and the Chancellor demands to know where she sent the bust of the King, which they suspect contains the missing ledger page. “America?,” he sneers. “No, not America,” she responds defiantly. “It is bound for the United States.” An officer finds a shipping receipt and informs the Chancellor that the bust is bound for Brooklyn on the ship Margaretta. Patience is shot dead.

In Morristown, Ben vents to General Washington about “The Thoughts of a Freeman,” an anonymous anti-Washington letter that calls for Washington’s removal and was reportedly written by General Charles Lee. Ignoring Ben’s concerns, Washington orders Ben to plant a spy in New York and deliver a full report on New York Harbor before they break camp.

In Setauket, Mary prepares to host a large dinner party at Whitehall, then sits down with her sewing circle. Her companions ask her to tell the story of the rebel raid on the Woodhull farm. She recounts the lie that she and Abe concocted: Rebels shot Ensign Baker and burned the farm down.

Abe enters the root cellar of his ruined home, which he has turned into his spycraft hideaway. He holsters a stiletto knife in a sheath on his forearm, then hides it under his shirtsleeve. He also fashions a tiny notepad and slips it into a hidden pocket.

At DeJong Tavern, Maarten DeJong orders Anna to bring more jugs of ale to his drunk friends. Major Hewlett drops by the tavern and asks to speak with Anna. In private, Hewlett invites Anna to accompany him to the Whitehall dinner, to honor her bravery for escaping the boat containing Selah and his fellow rebel captors. Hewlett feebly covers his romantic interest in Anna by saying it was Abe’s idea to invite her to the dinner.

To Mary’s dismay, Hewlett arrives at Whitehall with Anna. When Hewlett takes Anna upstairs to show her a piece of art, Abe follows them and asks Hewlett to help Richard pick out wines.

After Hewlett steps away, Abe urgently pulls Anna into a closet and asks her to signal Caleb. He passes her a note bearing instructions for a new codebook and an explanation of everything that has transpired in Setauket — with the exception of Mary’s involvement, which he worries will make him a compromised asset in Washington’s eyes. Anna asks Abe what his excuse to travel to New York will be. “You’ll see tonight,” he says, then kisses her. Mary sees Abe and Anna exiting the closet.

At dinner, Abe toasts his father for surviving a rebel bullet, and then announces his plans to complete his law studies at King’s College in New York. Realizing Abe’s true motives for traveling to New York, Mary objects on the grounds that Abe is a Patriot target and is endangering himself. Hewlett agrees with Mary, and, despite Abe’s objections, assigns Abe an escort.

In Morristown, Major Bradford reads “The Thoughts of a Freeman” aloud to some of his fellow soldiers. Ben accuses him of treason and starts a brawl. When Bradford’s fellow officers overwhelm Ben, Caleb jumps in to help. Ben thanks Caleb, and admits Caleb was right about the danger of signaling Abe.

In their bedroom at Whitehall, Abe bitterly applauds Mary for interfering with his New York plans, but refuses to abandon his mission for Washington. When he asks why Mary doesn’t turn him in, she confesses that she loves him. “I don’t feel the same,” he says. “I know,” she replies.

The next day, Corporal Eastin gallops up to Abe on the road, introduces himself as Abe’s escort, and says his orders are “not to let you out of my sight.”

In Morristown, General Charles Lee reads “The Thoughts of a Freeman” to his nearby companions at an officers dinner. Washington interrupts and asks Lee to read it to the entire table. Lee commences, but is interrupted by the arrival of General Benedict Arnold, who tears the letter in half and defends Washington. The officers, inspired by Arnold’s words, pound the table in support of Washington. Ben offers his seat to Arnold.

At Whitehall, Abe tells Hewlett that his ulterior motive for attending law school is to pose as a traitor and help take down the Sons of Liberty. He offers to go undercover and deliver the traitors’ names to Hewlett, but says he needs an official sanction from Hewlett in case he gets caught, as well as a promise that Hewlett will not mention the mission to Richard. He also points out his task will be made more difficult with Corporal Eastin always at his side. Hewlett considers Abe’s proposal.

Robert Rogers is finally granted an audience with the king, and petitions to lead an expedition to discover the Northwest Passage and claim it for England. The king offers to grant the petition if Rogers agrees to track down Patience Wright’s bust, and the intelligence hidden inside of it, before it falls into the hands of the rebels or France. Roberts accepts the mission, and takes possession of a badge which officially designates him as a King’s Messenger.

"I require a full report on New York Harbor before we move camp. You shall engage Culper or recommend to me a new head of intelligence."
―George Washington to Benjamin Tallmadge.