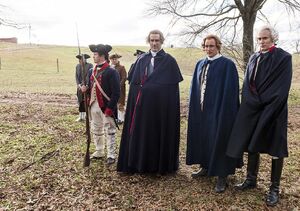 There is an inevitable march to the gallows for the captured spies on both sides.

In a flashback to 1776, Nathan Hale is hanged as an American spy.

In Setauket, Captain Simcoe starts to hang Abe Woodhull from a tree. Richard Woodhull intervenes and reminds Simcoe that Abe is legally entitled to a trial. Simcoe points out that Richard would be obliged to act as prosecutor since he is the town magistrate. Richard agrees.

At West Point, Peggy Shippen finds the blonde braid that John André had given her in her drawer.

Washington, Ben Tallmadge and Hamilton find Peggy in a disheveled state. She screams that spirits have taken Arnold. Washington calls for a doctor.

At Whitehall, Mary Woodhull rebukes Richard for standing against Abe and asks who will defend Abe at trial. Richard says that Abe has chosen to defend himself.

Abe spends the night in the stockade.

In Washington's tent, John André describes his correspondence with Arnold to Washington and Ben, and says that Arnold acted alone. André requests a fresh uniform from his home and asks that he be executed by firing line rather than hanging, which is reserved for spies. Washington agrees to consider his request.

General Clinton brings Arnold to André's home for temporary lodging. A courier delivers a dispatch from Washington then picks up André's outgoing mail. Clinton asks if any envelopes are addressed to him. Cicero quietly leaves the room. Clinton reads Washington's dispatch and announces that they're going to try John André as a spy, not an officer. He says Washington also proposed trading André for Arnold.

At Rivington's Corner, Maarten DeJong delivers a message to Colonel Cooke. Cooke explodes and leaves in a rush. Meanwhile, Samuel Townsend urges Robert Townsend to rejoin the cause. Townsend refuses.

Washington meets with Ben, Anna Strong and Caleb Brewster to assess their chains of intelligence. Anna insists they emancipate Abigail, though Washington contends that she might still prove valuable if transferred to another royal officer. Ben urges Washington to hang André to restore trust among their soldiers, but Washington argues that André was merely doing his duty as an officer. Ben also urges Washington to bring Abe in, but Washington refuses. To illustrate Abe's usefulness, Washington points out that Abe has survived as a spy for years whereas Nathan Hale and André were both caught on their first mission.

At the trial, Simcoe accuses Richard of intentionally drawing out the case. Richard calls Mary to the stand and interrogates her at great length. Mary announces that Richard revealed their secrets to Simcoe. The townspeople react angrily.

At André's trial, the board determines that he is a spy and will be punished by death. Afterwards, Washington shows Ben a letter from Arnold in which he threatens to harm American prisoners.

At André's house, Clinton rebukes Arnold for threatening to harm prisoners of war. He says he would gladly trade Arnold for André if trading defectors didn't discourage future rebels from defecting. He informs Arnold that he will be receiving a lowly brigadier rank but doubts anyone will serve under a turncoat.

Abigail arrives in Washington's camp. Anna informs her that she does not need to return to New York.

Abigail brings André his uniform. He comforts her as she cries for him.

Simcoe informs Abe that it's time for closing statements.

Ben and André ride in a carriage to André's execution. They express mutual admiration for each other's work. André asks who Culper's contact was in New York. Ben evades the question. André admits to Ben that he performed his duty for a woman, not for the king. Ben notices a drawing of Peggy's eyes in one of André's sketches.

As Richard begins his closing arguments, Abe has flashbacks to happier moments with his father. He interrupts Richard to proclaim that he was responsible for the riots that killed his brother Thomas. Unwilling to lie anymore, he admits to the charges against him. Simcoe pronounces death by hanging.

André marches to his execution and is taken aback when he sees the gallows instead of a firing squad. As he pronounces his final words, he spots Peggy in the crowd. Ben sees their gazes meet. André is hanged.

As Abe stands on the gallows platform, an advance rider informs Wakefield that Cooke is en route. Simcoe hangs Abe, but Richard, Mary and other townspeople lift Abe's body to loosen the noose. Cooke arrives as the residents help Abe to the ground. Cooke screams at Simcoe for destroying army property in Setauket and orders Simcoe to leave Setauket. Richard, who was responsible for summoning Cooke, snarls at Simcoe.

Ben approaches Peggy and assures her that André was thinking of her to the very end. He urges Peggy to flee before her role in Arnold's treachery is discovered.

Arnold walks into Rivington's Corner. "Turncoat," someone whispers. Arnold grumbles to Townsend about the rebel spies who foiled his plans and vows to seek revenge. Townsend tells Rivington he'd like to buy an advertisement.