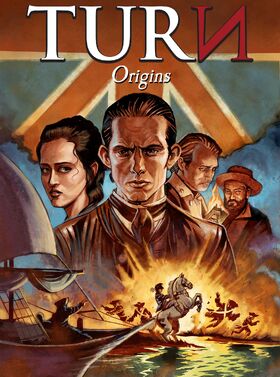 The roots of the friendship of Abe Woodhull, Anna Strong, Caleb Brewster and Ben Tallmadge form during their childhood. A British occupation of their hometown of Setauket turns a farmer, a tavern owner, a whaleboatman, and a rebel soldier into Washington’s most valuable assets.

It's the autumn of 1776 in Setauket, Long Island. Abe Woodhull stands with a pistol at the back of his head, aimed by Lt. Simcoe. He thinks to himself how a part of him wishes that he could go back to the way things were and remember various previous events in his life.

Abe remembers back to his youth, when he spent time with his best friends, Benjamin Tallmadge and Caleb Brewster and the time that they helped him sneak to Anna Strong's home to deliver a letter and to receive a kiss on the cheek.

Over the next few years, while Abe and Anna became lovers, tensions arose between the Tory Loyalists, including Abe's father, Judge Richard and the Whig families, including Anna's, dividing Setauket. Later, during a farewell parting event for his older brother, Thomas, Abe and Richard watch as a man insults Thomas for siding with the British. As the Woodhulls left the event, Abe looked to Ben, Caleb and Anna, as the three were standing together.

After the uprisings at Lexington and Concord and British losses at Bunker Hill, the King sends the British Army to defeat General George Washington and the Continental Army. During the various riots and battles caused from the British sending troops, Thomas is killed and Setauket is soon occupied by British forces.

Abe's thoughts return to the present, as he is attacked by Captain Charles Joyce and the troops under the British officer's command. Abe tries to keep to himself, while Ben fights against the British Army in White Plains, New York, being forced to a retreat. Ben and his men are rescued by Caleb, who arrives by water, with ships sending canon fire towards the British troops.

Later, at a Continental Army camp, Ben and Caleb discuss General Washington's understanding of the importance of intelligence and have a discussion about recruiting spies to the Continental Army cause. Ben mentions to Caleb that past spies didn't have the support of friends to keep each other alive and indicates his intention to build a spy ring with an inner circle of friends. Caleb is quick to ask where he can sign up. Ben states that the ring will require someone else, someone unassuming to help win the war.

Back in Setauket, Abe and Richard play a game of chess together, with Richard noticing Abe's trouble mind. Abe mentions that there are claims that General Washington has been driven into the wilderness, with Richard assuring him that the British will defeat them soon. He advises Abe to focus on his family, as Mary and their son enter the room. Abe kisses his son goodnight, as Richard tells him that family is everything.

With the fighting, money becomes hard to come by for Abe and he decides to use the black market to get by. However, he is soon detained by a man on a pirate sloop trolling the waters. and put in a cell. There, he is dunked in water, until the men doing so are ordered to stop by a familiar voice. Abe sees that it is Ben, who informs him that his capture was a ruse to make contact with him.

Ben attempts to recruit Abe to the spy ring, but Abe is quick to try to evade recruitment, until he eventually decides to agree and asks Ben what is required of him. Abe begins to make his way home, thinking to himself that he had kept his eye to his crops and his family, but everything is about to change.