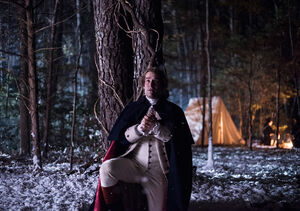 Washington faces a personal crisis with the help of his slave, Billy Lee. Abe struggles to maintain his cover while in prison.

At Valley Forge, Billy Lee informs General Washington that the messenger to Connecticut must depart no later than midnight because of an impending storm. Washington hallucinates that his teeth are falling out of his mouth, and asks Billy to summon the doctor.

A doctor diagnoses Washington with melancholia, brought on by “deep moral conflict within the soul,” and notes that the condition can sometimes lead to madness. Washington attributes the melancholia to his indecision over a written request from Major Hewlett’s captor in Connecticut, Lt. Chaffee, to execute Hewlett. He enlists Billy to help him decide Hewlett’s fate, noting the execution will go forward if he does not dispatch the messenger to Connecticut in time.

Flashback to 28 days earlier at the Continental outpost in Connecticut: Hewlett insists he did not kill Lt. Chaffee’s captain, despite the blood-scrawled note with his name on it. Lt. Chaffee strips Hewlett naked and throws him into an outdoor stockade, exposing Hewlett to the harsh winter conditions.

Washington informs Billy that Culper (Abe) has been captured and imprisoned in York City on charges of espionage. Flashback to 15 days earlier: Abe is shackled in a sugar house prison. A fellow prisoner, Gareth, offers Abe bread and false sympathy, then turns around and tells a guard that Abe confessed to spying. Gareth asks Officer Yates, the prison warden, to honor his promise to free him if he could get Abe to confess. Yates notes the lack of proof and dismisses the confession as hearsay.

Washington agonizes over his decision to execute or pardon Hewlett, who is the only man who can prove Abe’s innocence. He challenges Billy to a game of whist and reminisces about his deceased half-brother, Lawrence, who he revered. As they play, Billy suggests that Washington might be overthinking the decision, and Washington explodes at Billy. As they resume the game, Washington surmises that Abe is still alive — which means he probably has not confessed. Billy points out that Hewlett didn’t confess, either.

In the stockade, Hewlett distracts himself from the freezing cold by pretending to describe the constellations to Anna. Lt. Chaffee stops by and leaves Hewlett a knife, encouraging Hewlett to kill himself. After Lt. Chaffee leaves, it dawns on Hewlett that Simcoe framed him for the captain’s murder.

Billy tells Washington that Lawrence would never have let Hewlett live — and that Washington does not need to be like Lawrence. Washington shoves Billy onto the table and orders him never to speak of Lawrence again. Washington then storms outside for a walk, and hallucinates a trail of bloody footprints leading into the woods.

Richard visits Abe in the sugar house prison and tells him Hewlett has been abducted and Simcoe has returned to Setauket. Abe immediately asks about Anna’s safety. Richard tells him she belongs to Simcoe, noting that half the town saw them kissing. Richard is there to get Abe out of jail, but changes his mind when confronted with Abe’s stubbornness. “You wanted to be caught. You know what you’re doing is wrong,” Richard says. “Perhaps this is the safest place for you, at least until this war is over.” As Richard leaves, Abe vows to never stop what he’s doing.

In the woods, Washington sees an apparition of Lawrence and begs for his advice. Lawrence says he would never have lost Long Island or retreated at White Plains — but he also would not have crossed the Delaware to victory or taken on the mightiest empire on earth. “Then again, I am not you,” Lawrence says, then disappears.

Washington returns to his tent and thanks Billy for his help. He then writes to Lt. Chaffee, staying Hewlett’s execution so they can trade Hewlett for high-ranking Patriot POWs. Back in his own tent, Billy looks inside his bag and finds Washington’s beloved pocket watch, given to Washington by Lawrence. It is now a gift from Washington to Billy.

In his stockade, Hewlett uses Lt. Chaffee’s knife to slice off a frostbitten toe. As Lt. Chaffee reads Washington’s stay of execution, Simcoe and the Queen’s Rangers ambush the camp. Simcoe enters the stockade and tells Hewlett he had hoped they would execute him sooner. Hewlett stabs Simcoe in the side with Lt. Chaffee’s knife and escapes. A shocked and bleeding Simcoe vows to kill Hewlett.

"I am not afraid."
―George Washington as he begins to make his way into the woods.