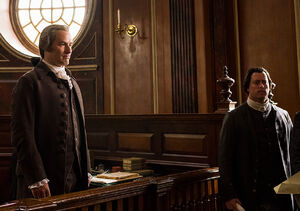 The fate of the Culper Ring is revealed; the American War of Independence comes to an end; a settling of accounts between shadows and spies; America struggles to begin.

At the Hampton Court Palace in London, King George rants to his advisors and refuses to admit defeat in the Americas.

In New London, Connecticut, British soldiers massacre Continental soldiers after the Continentals surrender. Benedict Arnold rushes towards the mayhem and orders his men to cease fire. Cicero flees while Arnold is busy admonishing his men. Akinbode intercepts Cicero in the woods and they run off together. Soon they’re intercepted by armed rebel militia and forced to lay down their weapons.

Abe Woodhull, Mary Woodhull and Thomas return to Whitehall, which is somewhat worn and dilapidated, but Abe is thankful it’s still standing.

Arnold packs for England to lobby the King for more men to fight General Washington. He tells Peggy Arnold that she will follow him to London shortly after. Abigail walks in and shows Arnold a ransom letter in which rebels threaten to harm Cicero. Arnold refuses to pay the ransom. Peggy offers to pay the ransom but Arnold forbids it. Peggy suggests Abigail appeal to the Patriots.

Abigail visits Major Hewlett and offers to give him intelligence about a rebel spy in exchange for a pass out of the city. Hewlett reveals that he already knows about Culper and her involvement in the ring. Hewlett says he’s travelling to Setauket to visit Abe to collect a debt, and offers to tell Abe about her plight in order to get it to Washington. She asks to go with him, but he advises her against traveling while slave catchers are on the rise. He suggests she board a ship that is transporting black Loyalists to Nova Scotia. He hands her a pen and paper and says he’ll deliver a message for her.

At Dejong Tavern, Abe tries to negotiate free seed from a farmer in exchange for a cut of his cabbage profits. The farmer refuses Abe’s deal and suggests Abe draw seed money from his father’s estate instead. Hewlett walks into the tavern.

Abe signs the deed for Whitehall over to Hewlett, who sells it to Dejong. Dejong hurries out. Hewlett urges Abe to pay for his seeds by requesting compensation from Washington himself. He also delivers Abigail’s message.

In Devon, England, Colonel Simcoe visits General Clinton to seek a new post. Simcoe walks with a cane. Clinton says he has no wartime posts to give Simcoe and offers to send him to Canada to develop and build the Northern Territories.

Crowds cheer for Washington as he rides down the streets of Philadelphia. The gauntlet stops at the American Congress. Selah Strong walks up and welcomes Ben Tallmadge. Ben tells Selah that Anna is in Philadelphia as well.

Selah greets Anna Strong at her tent. Before Anna can speak, Selah shows her a bill that he’s drafting to ensure pay for veterans. They sit together as Anna helps him revise the bill.

Cicero teaches Akinbode how to read in their colonial prison cell. Akinbode tells him about Canada and the bag of gold he buried in the woods.

Abe stops by Robert Townsend’s home in Oyster Bay to pass along Abigail’s note. Townsend tells Abe that he can personally deliver the note when the army comes to York City. Abe says he wants to ask Washington for recompense for their spying. Townsend says the only thing he regrets is being prodded into something his conscience should have dictated. Townsend says there’s one more issue to be settled between them. They play a game of draughts.

Abe unsuccessfully tries to grab Washington’s attention at a parade in York City. Abe spots Ben and asks to speak with Washington about compensation. He produces a list of expenses and receipts from his four years of spying. He also gives Ben the note from Abigail and says it requires special justice.

Washington stops by Rivington’s Corner and forgives James Rivington for publishing sensationalist Loyalist articles that targeted him and his wife. Washington hands Rivington an opinion from before the war: an article written by Rivington stating his newspaper is open to all parties. Rivington says this was before the Sons of Liberty destroyed his printing press and home. Washington encourages Rivington to return to his impartial journalistic roots by keeping the new government in check.

In London, Peggy has a flashback to when John André serenaded her with his flute. She learns from a fellow socialite that rumors of her romance with John André have advanced her standing in high society.

Arnold walks over and informs Peggy that he has secured an audience with King George. A homeless drunk in the street eavesdrops on their conversation as they pass by: it’s Robert Rogers. He follows them.

A Continental soldier releases Akinbode and Cicero after receiving a pardon from Washington.

Akinbode digs up the ransom money that he buried in the woods. He and Cicero reread Abigail’s letter, in which she tells them to meet her in Nova Scotia.

At night, Rogers approaches Arnold in the street and asks Arnold to assassinate King George for wronging them and to reclaim Arnold’s lost honor. He tries to give Arnold a pistol but Arnold refuses. Rogers accosts him and Arnold pushes him off. Rogers staggers away, half sobbing.

The next day, Arnold strolls with King George in his garden and offers to win back America if King George grants him 20,000 men. King George ignores Arnold’s request and instead heaps praise on John André. King George discovers dry flowers in his garden and orders people to come with water; upset at their slow pace, he urinates on the flowers in front of Arnold. Arnold discovers a gun in his pocket, planted by Rogers. The King talks about the monument he’s commissioned for André and Arnold pulls the gun from his pocket. He looks at the King ominously from behind and cocks the gun. When the King turns around, Arnold hides the gun behind his back. Arnold tosses the pistol on the ground and follows the King.

Abe cleans tables at Dejong Tavern. Caleb pays him a surprise visit and brings him outside, where they’re greeted by Ben, Anna, Selah, and, finally, Washington himself. Selah announces that he and Anna are moving to Connecticut. Washington arranges a dinner to honor Abe, much to the surprise of the townspeople.

Washington, Abe, Ben, Anna, Caleb, Mary and Selah dine together. Caleb announces that he has a fiancé and that Ben met a woman. Mary excuses herself to put Thomas to bed. Washington calls a toast for the Culper Ring. Abe says he’s appreciative of the recognition, but only requires recompense. Selah excuses himself, leaving only the Culper Ring members. Anna proposes a toast to the other members not present: Townsend, Nathaniel Sackett, Abigail, Cicero and Judge Woodhull. When Washington points out that members of the ring served for selfless reasons, Abe maintains that his farm suffered during his work as a spy and that he doesn’t qualify for veterans pay. Washington asks to speak privately with Abe.

Alone, Abe and Washington bond over discussion of growing cabbage. Washington writes a personal check to Abe to cover his expenses. Abe initially refuses since it is Washington’s own money, but Washington says he has learned the hard way that failure to settle accounts can turn friend into foe. Washington says Abe is owed much more, and says the country owes its life to people whose names will never be known.

Thirty years in the future, as an old man, Abe writes a letter to Thomas to tell him more about his life as a spy in the war. He says that Hewlett became an astronomer and great man of science and married the sister of Sir William Hershel. Abe writes that Simcoe went on to abolish slavery in the Canadian province that he governed, while Washington forced the slave boats to be turned around, unknowingly preventing Abigail from reuniting with Cicero and Akinbode in Nova Scotia.

In Abe’s recount of the years following the war, Washington becomes president, Caleb captains the coast guard and Ben becomes a Congressman. Abe writes that Arnold passed away in 1801, quickly forgotten by the British. Peggy died in 1804, and among her belongings was a lock of John André’s hair.

Abe finally reveals that Thomas was killed while fighting for his country in the Battle of Bladensburg on August 24, 1814.

As an old man, Abe places the letter in a hole in a tree, and says he’ll tell Thomas everything else when they reunite in heaven.

General Clinton: Parliament is currently pondering the fate of the remaining North American provinces. Upper Canada has need of leadership.
Simcoe: Excellent. Who are we fighting there?
General Clinton: No one, except the weather, I suppose.You wouldn't be going there to fight, John. You'd be there to build, to create, to develop the territory, establish a local gentry. I mean, to all intents and purposes, you'd be Lord Simcoe.

General Washington: I know what it is to see your land in need. I made no money from my estate during the war and brought none home with me. I nearly had to sell Mount Vernon, which would have been too great a loss to bear. But you have already suffered such.

General Washington: It was a very hard lesson, but I have learned well. A failure to settle accounts can turn friend to foe. Whereas the payment of a debt is freedom felt by all. You are owed much more than this. Thank you. Our country owes its life to heroes whose names it will never know.